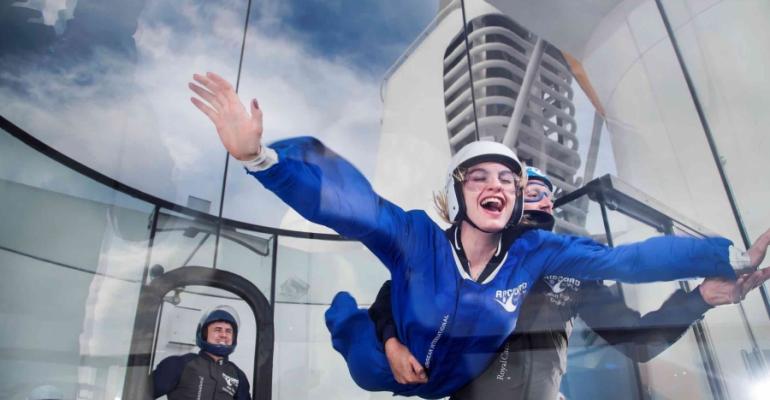 Royal Caribbean International is extending Ovation of the Seas’ second 2017/18 Australian season by six extra cruises, spending a further five weeks homeported in Sydney.
Ovation was scheduled to make nine sailings during her second Sydney-based season with departures from November 2017 through to February 2018.
Her new 2018 round-trip sailings are an eight-night South Pacific cruise departing February 18, a 10-night cruise to New Zealand leaving February 26, a five-night cruise to Tasmania departing March 8, another 10-night cruise to New Zealand departing March 13, a three-night sampler departing March 23 and a 14-night repositioning voyage to Singapore leaving March 26.
Last month Royal Caribbean announced the brand new Ovation of the Seas would extend her maiden Australian season.
The 168,666gt megaliner, which arrives for the first time in Sydney on December 15, was due to depart on January 23, 2017, to return to China.
However, md Australasia Adam Armstrong said the ship has exceeded all expectations and the company was adding four extra cruises to meet demand, extending the maiden season into late February 2017.
Armstrong said Ovation of the Seas is offering Australians new experiences at sea, like skydiving and bumper cars and a glass viewing pod 90mtrs above sea level.
‘There is no denying that Ovation of the Seas is big; at around 6,400 passengers and crew she is the size of a small Australian town,’ he said.
‘But with that size comes more choice, space, variety and options.’
Armstrong said Ovation is appealing to an incredibly wide range of travellers.
‘Existing cruisers are excited about the new amenities she offers, but she is also fascinating Australians who have never cruised before,’ he said.
‘She is redefining the concept of cruising and we are delivering an entirely new way to holiday.’
Copyright © 2023. All rights reserved. Seatrade, a trading name of Informa Markets (UK) Limited.
TAGS: ports & destinations cruise lines ships source markets weekly featured
0 comments
Hide comments
Related