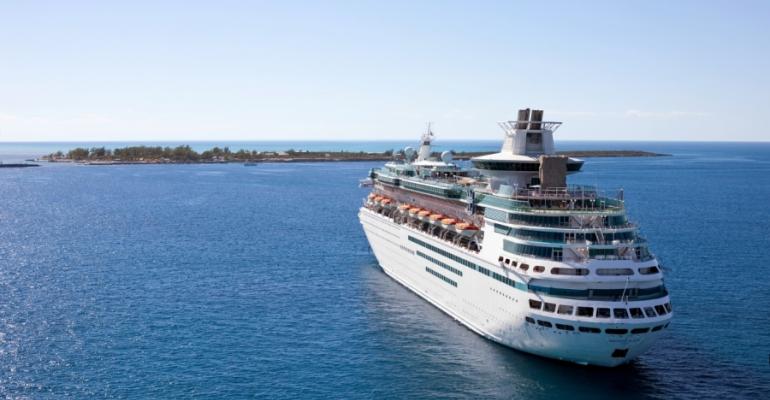 Majesty of the Seas off CocoCay. Plans for a pier would facilitate Oasis-class ships, the Bahamas prime minister said (Photo: Royal Caribbean International)
Royal Caribbean is looking at building a $47m pier that could dock Oasis-class ships at its private island, CocoCay, while Carnival Cruise Line is in talks about creating a major cruise port in East Grand Bahama, Bahamas Prime Minister Perry Christie said.

A Royal Caribbean spokeswoman told Seatrade Cruise News her company is 'in discussions to build a pier in CocoCay as continued development of one of our important ports of call is a priority for us.'

She added: 'That is all we can really say at this time.'

Meanwhile, Christie said the government had executed a waiver of exclusivity with Freeport Harbour Co. with respect to the operation of cruise ports on Grand Bahama.

This, and a new memorandum of understanding with the Grand Bahama Port Authority, Hutchison Ports and other related entities, have 'cleared the way for completion of negotiations with Carnival Cruise Line for the creation of a major cruise port with compelling attractions in East Grand Bahama,' the prime minister said.

For some time, Carnival has been hoping to develop a destination in the Bahamas. At Grand Bahama, all cruise ships currently berth at a Freeport pier that's adjacent to the container port. Freeport is on the island's western end.

'Carnival Cruise Line is looking at potential guest-enhancing opportunities in the Bahamas,' he said in an email. 'Carnival and government are in discussions, with details to come at a later date.'

In his budget communication Christie mentioned he'll be joining MSC's chairman at Ocean Cay next month for an official ground breaking, to be filmed by the BBC for a documentary.

According to the prime minister, Norwegian's expansion at Great Stirrup Cay will enable 40 additional ship calls a year by 2018.