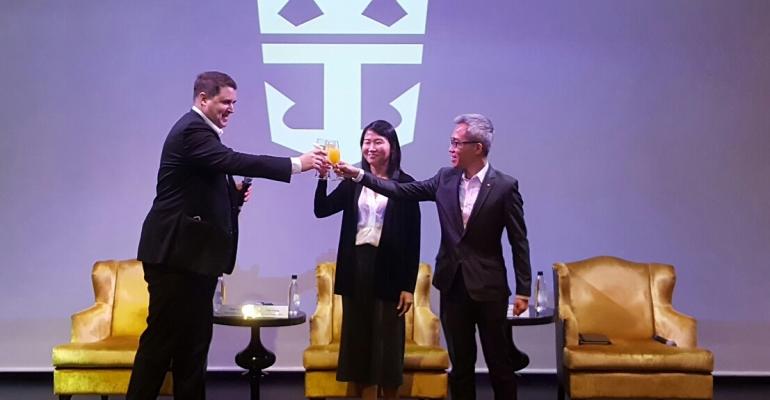 The collaboration will promote cruising out of Singapore to overseas passengers on Ovation of the Seas and Voyager of the Seas.

According to STB, this latest tripartite partnership is projected to generate over S$26m in tourism dollars. It is also expected to bring in around 45,000 overseas fly-cruise guests to Singapore to sail on the pair of ships from March to June 2017.

The partnership is underpinned by news of the cruise brand’s longest-ever deployment of ships in Singapore from 2017 to 2019.

Projected to bring in over 170,000 overseas fly-cruise visitors to Singapore over three years, the first year’s numbers surpass the annual visitor target by over 40%.

To kick off the partnership, Ovation of the Seas arrived for her inaugural season in Singapore Monday with 10 sailings to take place during this season.

According to RCI, more than half of the ship’s bookings have come from overseas, with the five- and 12-night sailings proving to be popular. The vessel can carry 4,905 guests, while Mariner of the Seas and Voyager of the Seas have a capacity of 3,807 and 4,269 guests respectively. These are among the largest capacities in Asia.

The tripartite partnership, which can be extended into subsequent years,  is the latest between CAG, STB and a cruiseline. In recent years there have been similar agreements with Princess Cruises, Costa Cruises and TUI Cruises as well as RCI itself. The brand’s first collaboration has been in place with Mariner of the Seas since August 2015.

Sean Treacy, md Asia Pacific of Royal Caribbean Cruises Ltd. said, 'This tripartite partnership is a tremendous boost for our first Ovation of the Seas season in Singapore as we deepen our commitment to this region with even more attractive cruise products.'

The signing of the new partnership also marks another milestone in Royal Caribbean's 10th year in Asia. The partnership will be carried out via a series of marketing campaigns, research studies and channel development activities, such as partnerships with the media and trade. These will be targeted at markets not only within Asia like India, Indonesia, Malaysia, the Philippines, China, Hong Kong, Japan, Korea and Taiwan, but also beyond the region in Australia, Europe and North America.

Coupled with the optimistic outlook for cruise tourism in Asia, which witnessed double-digit growth in cruise capacity and became a source market in recent years, this partnership promises significant economic impact to Singapore.

Singapore’s award-winning Changi Airport’s strong air connectivity to more than 380 cities worldwide and around 7,000 flights each week, is positioned to  tap into fly-cruise traffic and serve as a cruise hub for the region.

Peh Ke-Wei, Changi Airport Group’s vp of passenger development, said, 'Fly-cruise traffic has performed well in recent years, and Changi Airport seeks to further grow this segment together with our partners, as part of Changi Airport’s aim to grow different passenger segments in Singapore. With these new offerings, visitors to Singapore will have more travel options.'

He added that airlines can add supplementary or chartered flights to support the fly-cruise initiatives. He expects incremental traffic, especially with the opening of Changi Airport’s Terminal 4 later this year.

Peh said they are working with stakeholders, including immigration authorities to build a seamless passage from home country to cruise vessel cabin to enhance passenger experience.

STB’s role, as Singapore’s cruise industry champion, is tasked with helping cruise stakeholders succeed. Annie Chang, director, cruise, said the industry’s success is dependent not just on cruiselines and tourism authorities but on an entire ecosystem that is supported by the likes of NTO and airports.

She said the fly-cruise segment is a significant market and it is important to have sourcing from the region. India, for instance, grew 29% last year and Singapore is also seeing good growth trajectories for cruise passengers from China as awareness rises. Singapore stands to benefit when cruise passengers spend pre and post-cruise days. Chang reported that on-shore spending by cruise passengers generally exceeded that of non-cruise tourists.

'The announcement of Royal Caribbean's longest deployment for the next three years is a reflection of how multi-sector collaborations like these are vital to developing the local and regional cruise industry. It is these partnerships that enable Royal Caribbean to bring bigger and more innovative ships to Singapore, enhancing the cruise experience for travellers and ultimately growing the industry here,' said Treacy.