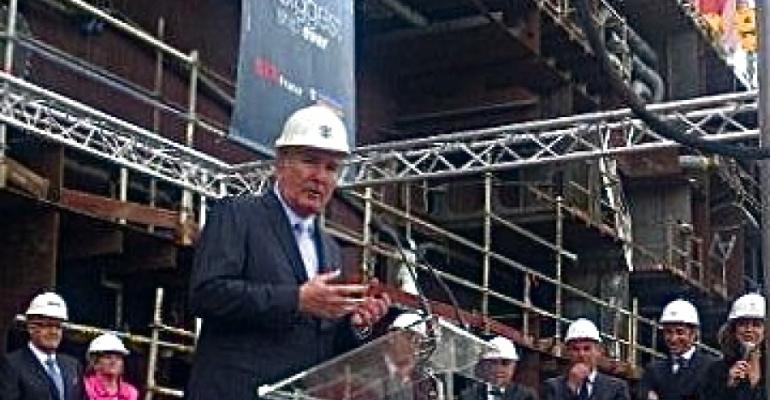 Update: Adds newbuild cost estimate. Royal Caribbean Cruises Ltd. has reached an agreement with STX France to move forward on the order of a fourth Oasis-class ship for delivery in 2018.

Royal Caribbean chairman and CEO Richard Fain and president and COO Adam Goldstein, along with STX France CEO Laurent Castaing, signaled the planned order at the keel-laying ceremony for the third Oasis-class ship at STX France in Saint-Nazaire Friday.

'We are thrilled to announce the order of a fourth Oasis-class ship during the keel-laying milestone of the third,' Fain said.

He added: 'The Oasis class was a revolution in maritime design when it was launched in 2009. Oasis of the Seas and Allure of the Seas continue to be in a class by themselves both in terms of guest satisfaction and financial returns. Today's announcement is a reflection of their success.'

The order is subject to documentation and financing. No price was disclosed. Oasis 3 was ordered for approximately €1.3bn.

Conder thinks that over the next 12 to 18 months, the company could announce the deployment of an Oasis-class ship to Asia, at least for part of the year.

Oasis 4 is expected to build further on the efficiency of Oasis 3, which will be approximately 20% more energy-efficient than Oasis of the Seas and Allure of the Seas, which are cutting-edge in efficiency.

Castaing expressed his excitement about Royal Caribbean's decision to move forward on Oasis 4 which, he said, demonstrates the company's confidence in STX France.

Newly minted coins were placed under the keel and will stay in place until the end of construction. Once the ship is near to completion, the coins will be retrieved and presented to the ship's captain and crew to be placed on board.