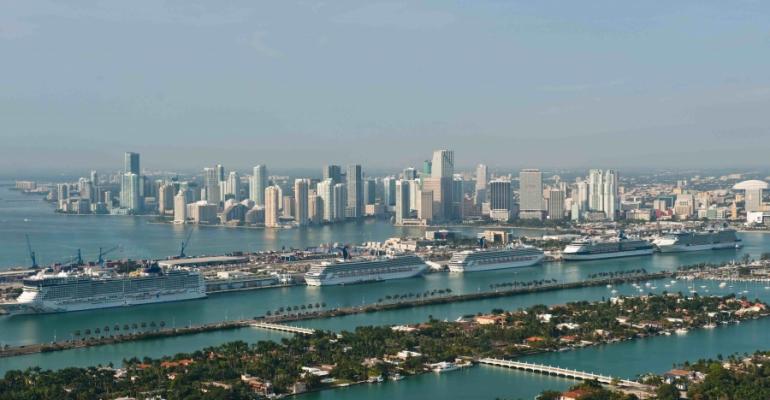 New Royal Caribbean terminal at PortMiami would be located at the northeast side of the facility, to the left of the berths pictured here (Photo: PortMiami)

Royal Caribbean Cruises Ltd. is in talks with Miami-Dade County officials to build a $100m cruise terminal at PortMiami with a berth capable of handling ships up to 400 meters long—plenty ample for a 360-meter Oasis-class vessel.

'We can't park our biggest ships in Miami and, with a project like this, we could. So this opens lots of possibilities,' Royal Caribbean spokesman Rob Zeiger told Seatrade Cruise News.

According to county documents, the cruise operator would design, finance and build the new Cruise Terminal A on a 10-acre site at the northeastern end of the port, in an area that is partly now used for cargo operations.

The facility, to include a multi-tier parking garage with approximately 1,000 spaces, would become operational in the second half of 2018.

PortMiami anticipates Royal Caribbean would invest well over $100m during the construction phase of the project and the port will invest several million dollars.

Zeiger could not confirm the $100m figure but said that would put the terminal among the company's most costly infrastructure investments. He added it's too early to talk about design details. The timeline, he acknowledged, is very short—the memorandum of understanding talks about a July 31, 2018 target completion date—but 'We think we can build this as fast as we can build a ship.'

Zeiger called the plans a vote of confidence for South Florida, adding that he doesn't anticipate any port to be a loser in a situation like this in view of the company's newbuild orderbook. Royal Caribbean has a 'really great relationship with Port Everglades,' which was 'able to execute for Oasis and Allure,' he noted, in building the $75m Terminal 18.

'It feels good when we can grow anywhere and make an economic impact. It feels especially good when it's in our hometown,' Zeiger added.

The ground lease would have an initial 20-year term, with Royal Caribbean holding an option to extend for up to four additional terms of 10 years each.

Base rent for the facility would be $9.5m a year, with a 1.5% increase compounded annually. In addition, the county would receive $5.50 per passenger move for every Royal Caribbean passenger in excess of 1.55m passenger moves each year at Cruise Terminal A.

Before 2009, PortMiami averaged more than 1.6m Royal Caribbean passengers annually. Subsequently Miami lost a majority of the cruise giant's business when the new Oasis of the Seas and Allure of the Seas began operating year-round at Port Everglades.

At the time, Miami didn't have facilities capable of accommodating these ships nor did it have suitable expansion plans.

PortMiami currently handles about 730,000 Royal Caribbean passengers a year, about 15% of the port's overall passenger traffic. The cruise operator's contractual guarantee to the county is only 325,000 passengers a year for the preferential use of Cruise Terminal G, at the northwestern end of the port.

Under the PortMiami 2035 Master Plan, adopted in late 2010, eight cruise berths are envisioned along the north channel—six existing berths, plus two new berths. The new berths, called Cruise Terminal A and Cruise Terminal AA, would be the last possible facilities on the port's north side.

Additional matters to be negotiated include a possible option for Royal Caribbean to construct and potentially use and operate Cruise Terminal AA. Discussions about amending the cruise operator's Terminal G terms and additional extension options for the Royal Caribbean corporate offices at the port would be negotiated, too.

County commissioners are to consider a memorandum of understanding with Royal Caribbean for the new cruise terminal at a commission meeting on Sept. 16.