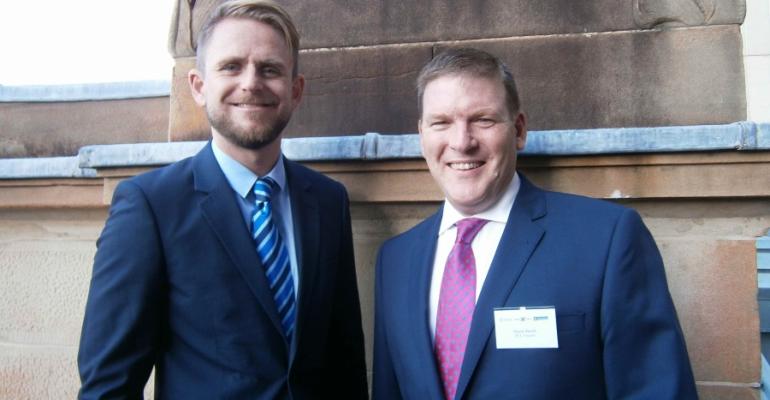 Gavin Smith, right, and Adam Armstrong on the balcony of Customs House (Photo: Helen Hutcheon)
Royal Caribbean Cruises Ltd. Australia’s 2015-16 wave season in Australia began Friday with the same-day turnaround of Radiance of the Seas, the first of seven of the company’s ships to arrive this Southern Hemisphere summer.

Regional vp RCL Cruises Asia-Pacific Gavin Smith hosted a cocktail reception on the balcony of Customs House overlooking the Overseas Passenger Terminal at Sydney Cove so guests could watch the 90,090gt ship pull out on her first cruise of the season.

RCL commercial director Australasia and South East Asia Adam Armstrong said the arrival of Radiance of the Seas marks the company’s ‘boldest’ season Down Under.

The company will have all three of its brands in Australia, with Royal Caribbean International, Celebrity Cruises and new arrival Azamara Club Cruises offering a range of 95 itineraries around Australia, New Zealand, the South Pacific and Asia.

Armstrong said RCL will carry a quarter of a million passengers over the season with almost 60,000 of them coming from overseas countries including the United States, Canada, the UK and Germany.

He said the seven ships will make 185 port calls and 85 turnarounds and will inject more than A$185m into the local economy in passenger spending alone.