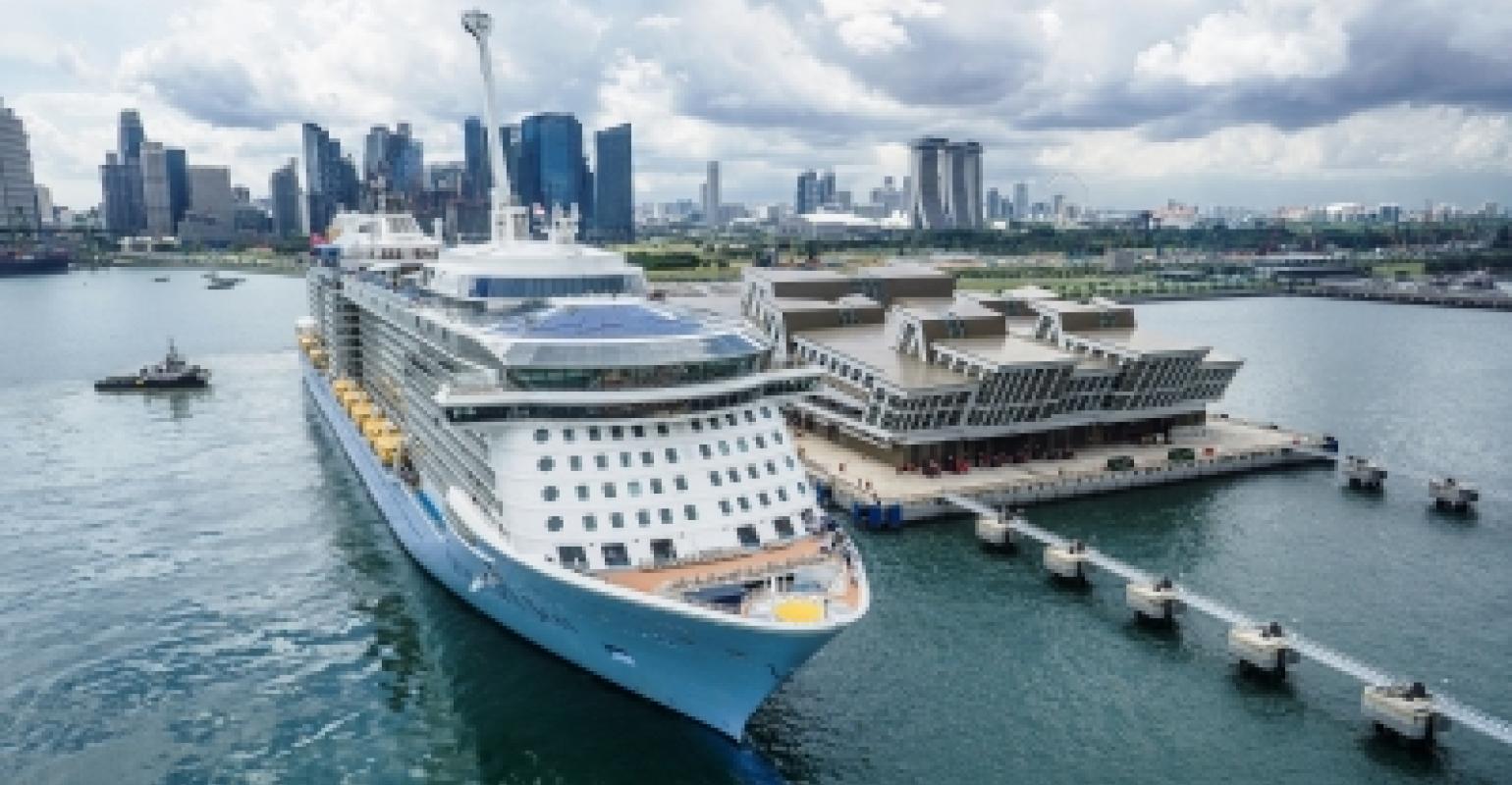 Quantum of the Seas will have an extended homeporting at Singapore's Marina Bay Cruise Centre
Royal Caribbean International is extending Quantum of the Seas' Singapore season through April 2021 and in doing so deepening Royal’s commitment to the region with capcity for an additional 180,000 passengers.

The extra seven months of homeporting in Singapore, will make this the cruise line’s longest ever Singapore deployment for a Quantum class ship.

The announcement, was the highlight of the maiden call celebration of Quantrum Ultra ship Spectrum of the Seas. The ship retuned to Singapore Tuesday following a three day cruise.

Angie Stephen, Managing Director, Asia Pacific, Royal Caribbean Cruises, reiterated to SCN that the Asian cruise market has been maturing over the decade and continues to grow at record pace, with a rising number of experienced cruisers and first-timers who have greater product awareness and information.

Newest and largest ship in Asia

‘Royal Caribbean is well placed to ride on this wave of growth with the deployment of new ships like Spectrum of the Seas, the newest and largest ship in Asia and Quantum of the Seas from late 2019,’ she added.

Scheduled to return to Asia in November 2019, Quantum of the Seas will first see 34 sailings during the six months from November 2019 to April 2020.

The ship will then return for a longer season in October 2020, with a total of 40 sailings over seven months till April 2021 - the cruise line's longest ever Singapore deployment for a Quantum Class ship.

Stephen added that there is tremendous potential and growth in Asia, and ‘Royal Caribbean remains committed to growing our cruise offerings in Singapore and across Asia through our additional capacity.’

Royal Caribbean’s Senior Vice President International, Gavin Smith,  who graced the momentous celebration on board the Spectrum with some 300 industry guests, said that the commitment to bring in two of Royal Caribbean’s largest and most innovative ships in 2019 alone, along with the decision to sustain the presence of a Quantum Class ship in the region till 2021, underscores Royal Caribbean’s confidence in the region’s thriving cruise industry, with Singapore playing a major role as a cruise hub.

‘Royal Caribbean has big ambitions for Asia – and Singapore sits at the heart of our growth in this region,’ he commented.

2019 marks Royal Caribbean’s 50th anniversary as a global brand, and ships like Spectrum of the Seas and our additional capacity with Quantum of the Seas here shows that we are poised to ride on Asia’s astounding growth, he added.

‘Singapore plays an important role as one of the region’s most significant cruise destinations, and we look forward to growing the cruise industry here and in the region,’ said Smith.

‘We are pleased to welcome Royal Caribbean International’s Spectrum of the Seas, and look forward to Quantum of the Seas’ new homeport season in Singapore, both of which add to the diverse cruise offerings in the region. The latest deployments are also a testament to years of strong partnership with Royal Caribbean, and its confidence in the region’s growing demand for cruising as a holiday option,’ said Ms Jeannie Lim, Assistant Chief Executive, Policy and Planning Group, Singapore Tourism Board.

Spectrum of the Seas kicks off her inaugural Singapore season this month, with three sailings of 3 to 9 nights to destinations such as Penang, Kuala Lumpur (Port Klang), Ho Chi Minh City (Phu My) and Hong Kong. She will be based in Shanghai from this June.