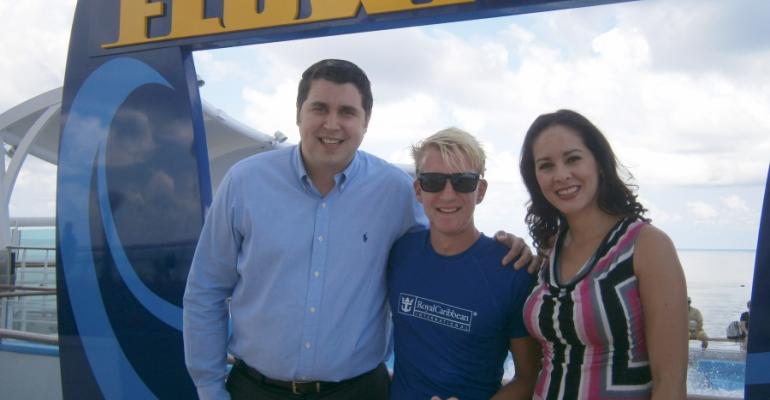 Royal Caribbean’s Voyager of the Seas received a water cannon welcome to Sydney Monday morning when she arrived for a third consecutive season after a month-long US$80m makeover at the Sembawang Shipyard in Singapore.

As previously reported, new features include the region’s first at-sea FlowRider surf simulator which was a hit with Australian passengers during the 13-night voyage from Singapore via Darwin and Brisbane.

Wildman, who comes from Queensland’s Gold Coast and is the European flowboarding champion, joined sports staff in showing passengers how not to be wiped out on the complimentary FlowRider.

Fireworks were to farewell the ship when it sailed at 9.30 p.m. on an overnight cruise to nowhere for more media and travel industry partners to show off additions, including three alternate dining venues—Giovanni’s Table, Chops Grille and Izumi—and interior staterooms with virtual balconies.

Treacy said Voyager of the Seas will sail at full capacity, 3,800 passengers, when she departs Tuesday on an 11-night cruise to New Zealand.

She will be homeported in Sydney until March 16 when she leaves on a 16-night voyage to Fremantle. On April 1 she departs Fremantle on a 14-night voyage to Singapore via Bangkok and Ho Chi Minh City.

Voyager will return to Sydney for a fourth 2015/16 season with Explorer of the Seas and Radiance of the Seas, while Legend of the Seas will operate a maiden five-month season in Brisbane from December 2015.