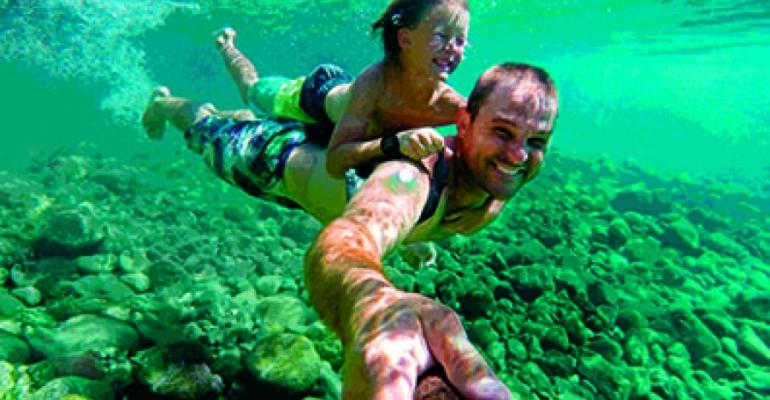 With a huge new brand campaign—its biggest ever, by far, during the fourth quarter—Royal Caribbean International invites adventure-seekers to 'Come Seek' their own experience filled with exploration and discovery. Live streaming content from the destinations and innovative ship features star in the multimillion-dollar integrated campaign.

'Come Seek' hones in on the 35.2m consumers who are interested but need more convincing to take a cruise, according to Jim Berra, Royal Caribbean's chief marketing officer.

They're at the campaign's heart, as it projects their personal experience aboard Royal Caribbean ships with sky diving, surfing and zip lining, and indulging in the Caribbean's richness, from joining Junkanoo dancers to snorkeling on a fabulous reef.

The 'Come Seek' message aims squarely at conventions that may keep people from trying a seagoing vacation by drumming the phrases 'This is Not a Cruise. You are Not a Tourist. This is Not the Caribbean.'

The campaign is 'all about the destination experience and focused on attracting first-time cruisers while not alienating their repeat customers, and the commercials I previewed are awesome,' said Michelle Fee, ceo and co-founder of the giant home-based network Cruise Planners, an American Express Travel Representative. Fee is a member of Royal Caribbean's travel agent advisory board.

Broadcast, digital and outdoor advertising, in addition to public relations, social media and direct marketing, are all part. There's a large trade push, too. 'Come Seek' breaks Monday with a series of broadcast and online ads, including a first-of-its-kind live streaming outdoor campaign in New York City delivered via the Periscope social platform.

The media scope is immense. Royal Caribbean is spending 35% more in the fourth quarter than it has in the past, according Berra.

'We'll increase our spending during the wave [season] as well. We'll be very aggressive,' he told Seatrade Cruise News.

Next-generation travelers are tech-savvy. All use social media so they expect pervasive Wi-Fi; that means Royal Caribbean's super-fast VOOM is very important. Also, research shows that when choosing a hotel, 86% of these travelers deem aesthetics as important, so when the ads show a ship, its style and innovative design are key. And the destinations are critical.

These travelers want experiences, and they're looking for 'the humble brag,' as Berra put it, a way to share their experiences with friends on social media.

At a time of media fragmentation and a fair amount of consumer indifference in general, Royal Caribbean aims to break through the clutter and connect with the market, Berra said. There will be a battery of short spots—five-second teasers like sky diving or surfing—in select national media including television programs with heavy live viewership such as 'The Voice,' 'The Late Show' with Stephen Colbert and 'The Tonight Show' starring Jimmy Fallon as well as social media channels. These will be pervasive in the first two weeks across channels like ABC, NBC, Hulu, Amazon, Spotify, Facebook and YouTube.

They'll pave the way for the 30-second spots.

A more aggressive regional approach will focus on markets like New York, timed with Anthem of the Seas' stateside arrival, where some 230 geo-tagged billboards in locations like Grand Central Station and Penn Station will stream live content from the ships and destinations, enabled by Royal Caribbean's VOOM. Some of that content will come from aboard Anthem of the Seas during its week of inaugural events in early November. About 79.5m impressions are planned in November alone.

In the sophisticated New York media market, people tune out the message if it's too slick and over-produced, Berra said.

So more first-person content is key. Royal Caribbean will be leveraging its crew to broadcast images they generate, starting with a crew page on Tumblr. This could ultimately expand to travel agents and cruisers, Berra said.

'Any campaign cannot be a success without our travel partners,' according to Vicki Freed, svp sales, trade support and services, who said they have repeatedly asked for a campaign with the kind of clout like 'Get Out There' of years back.

'It was disruptive. We haven't hit it until now, with "Come Seek,"' she said. Royal Caribbean has been briefing its key trade partners and changes will ripple through the sales organization, with sales calls being renamed 'seekers' sessions.'

'We'll give [trade partners] the tools and resources to help get more people who are seekers,' Freed said.

Cruise Planners' Fee noted hefty market research was used to shape the campaign, which targets 'older millennials who have never cruised and want a unique experience at Royal Caribbean’s cruise destinations—more than just a sandy beach, but truly exotic experiences.'

Honing in on the personality of each island and the distinct experiences travelers can have, including active excursions, the campaign represents a shift from what the brand has done in the past when it focused on the ship as a destination, Fee said.

The use of Go-Pro live streaming from the Caribbean will be novel, she added.

'The live streaming videos are an industry first and will air real people who are experiencing different Caribbean adventures in the islands such as zip lining, kayaking and more to attract the experiential consumer to cruising on Royal. I look forward to seeing the positive results of this new approach,' Fee said.

From its launch and into wave season, 'Come Seek' will emphasize the Caribbean, but Berra said the Mediterranean, Alaska and other parts of the world are to come.