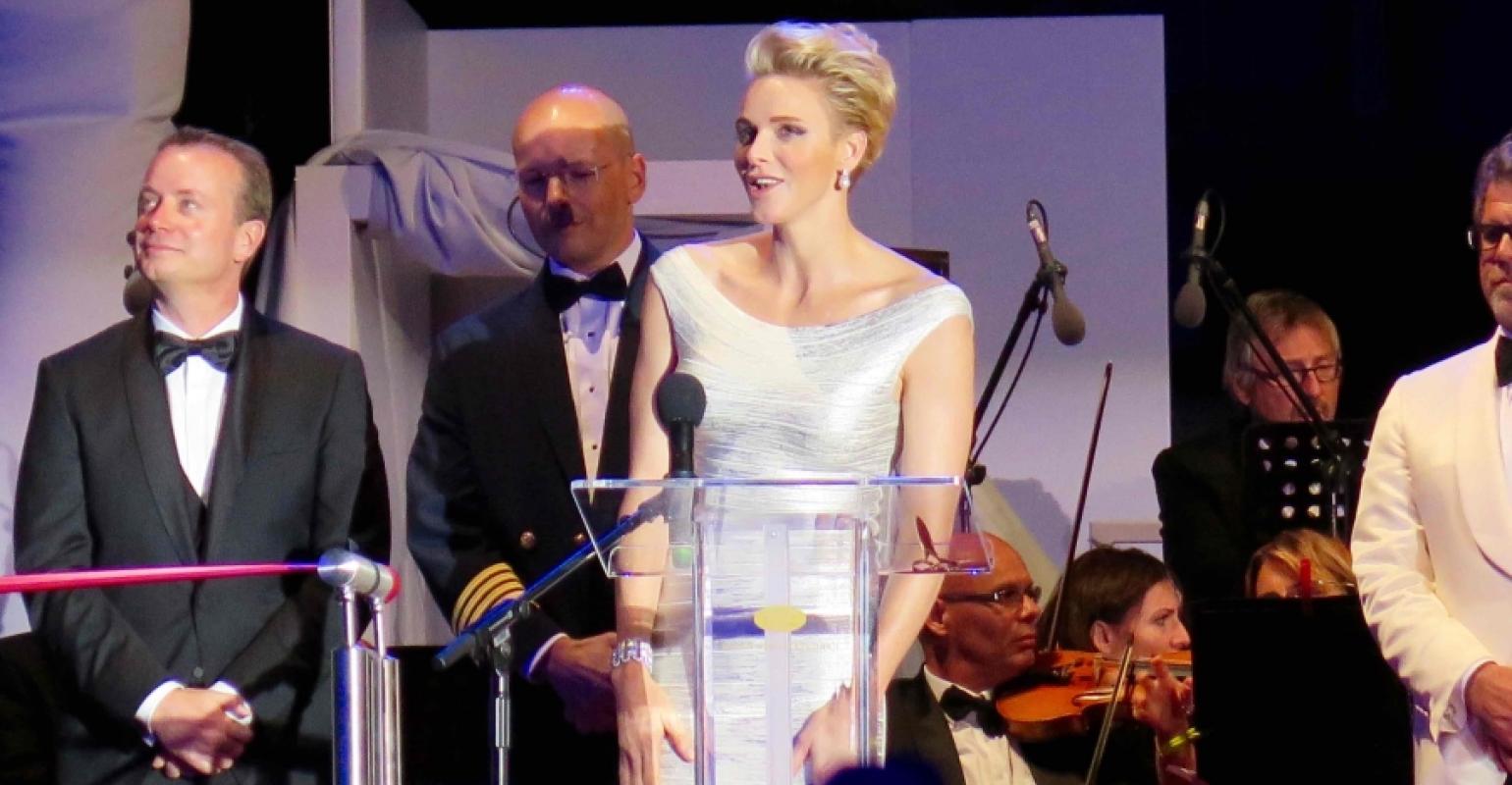 Arriving on the arm of Prince Albert, Princess Charlene of Monaco served as the glamorous godmother. She smashed the Primat bottle of Veuve Clicquot Champagne to cheers before blowing her ship a kiss, and the world-renowned tenor Andrea Bocelli capped the evening with a standing ovation concert under a perfect half moon.

As Del Rio took the stage before 700 guests in black tie and gowns, the orchestra played James Bond's theme song.

'The first time I christened a ship they played the "Rocky" theme so I'm glad I've graduated to James Bond,' he quipped. Del Rio noted the festivities were taking place 'where 007 orders his martinis shaken, not stirred ... a fairytale setting nestled between castles, mountains, sea and sky.'

There had been no choice but Monte Carlo for the christening of what Regent calls the most luxurious ship ever built.

'Seven Seas Explorer is in a luxury class of her own,' Del Rio said.

He thanked travel agents, shareholders, employees and loyal past guests for Regent's success and singled out Robin Lindsay, evp vessel operations, Norwegian Cruise Line Holdings, and Franco Semeraro, svp hotel operations, Regent, for taking the lead on Seven Seas Explorer. The company had given Tillberg Design, iCrave, CallisonRTKL and Dakota Jackson 'carte blanche' to create the interiors and the drawings they produced 'leapt off the pages, they were that stunning,' in Del Rio's words.

Watching Seven Seas Explorer come together over the last two years at Fincantieri was like seeing the London Symphony Orchestra perform, he added, acknowledging shipyard ceo Giuseppe Bono in the audience.

Regent president and chief operating officer Jason Montague said the evening was 13 years in the making, since the brand's last ship had been introduced in 2003. He noted 27 loyal Regent guests were present who had sailed a total of 23,161 nights with the line.

Kevin Fraser, host of 'Entertainment Tonight,' served as the master of ceremonies, Capt. Stanislas de Lacombe presented his chief officers to Princess Charlene, and Andrea Bocelli thrilled the crowd with one gorgeous song after another, culminating with 'Nessun Dorma.'

Three godmothers of other Prestige Cruises ships were on hand—Del Rio's wife, Marcia, who did the honors for Oceania Cruises' Regatta; Virginia Watters (Insignia) and Fana Holtz (Nautica).