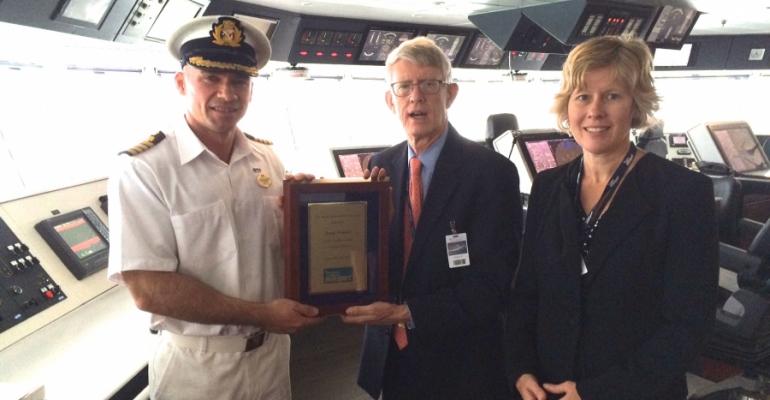 Massachusetts Port Authority officials welcomed the first call of Royal Princess to the Port of Boston with a plaque presentation to Capt. Dino Sagani on Monday. The ship arrived from New York City on a transit visit en route to Maine as part of its Canada/New England itinerary.

Royal Princess is among the largest cruise ships ever to call at Boston.

'We are proud to welcome Royal Princess as one of eight maiden calls this season at Cruiseport Boston,' Massport ceo Thomas P. Glynn said.

Cruiseport Boston had back-to-back record seasons in 2012 and 2013 and is responsible for nearly 2,000 direct jobs and over $187m in annual economic impact. A peak 382,885 cruisers visited last year.

HAL is a long-time customer at Boston, Massport port director Deborah Hadden noted, adding: 'We welcome the new relationship between Holland America Line and Princess Cruises and look forward to working closely with both lines to continue to bring new and exciting ships and itineraries to Boston in the future.'