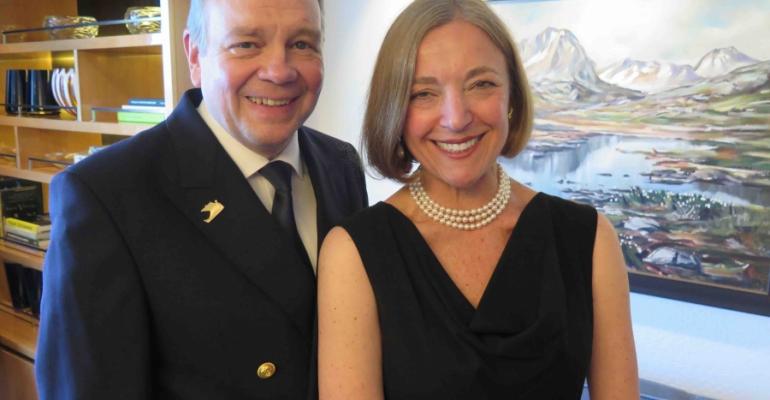 Got his start on Royal Viking Sea as a deck hand - Capt. Atle Knutsen and wife Lara aboard Viking Sea (Photo: Anne Kalosh)

For Capt. Atle Knutsen, commanding the new Viking Sea has special meaning as he takes the ship on Sunday for the first time to Bergen, Norway, his hometown. Also, Knutsen had first gone to sea aboard the ship's namesake, Royal Viking Sea, at 21 as a deck hand. That was in 1986.

'I'm so proud of my husband. The fact he did scrub the decks means the crew has more respect for him,' said the captain's wife, Lara, who has been aboard Viking Sea since March 25, when the ship left Venice following its delivery from Fincantieri. (She's a cruise industry veteran, too, formerly working 14 years for Crystal Cruises.)

When Viking Sea arrives at Bergen, a group of singers is scheduled to come aboard to perform sea shanties. Among them will be Capt. Helge Brudvik, who was Knutsen's first captain when the young man worked aboard Royal Viking Sea.

'He was the one who walked around and checked the teak railings,' Knutsen said.

The captain told Seatrade Cruise News about other Royal Viking Line veterans who have visited Viking Ocean Cruises. Capt. Ola Harsheim was aboard Viking Sea for the shakedown sailing. And, poignantly, Capt. Haakon Gangdal had toured Viking Star last year when the ship came to Bergen, shortly before he died.

In yet another Royal Viking Line reminiscence, Knutsen noted that three days ago, when Viking Sea was at Le Havre, the former Royal Viking Sea—which operates as Albatros for Phoenix Reisen—had passed in the channel.