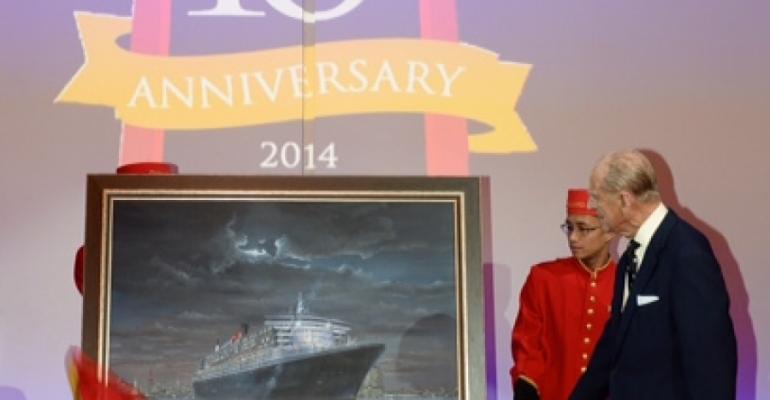 HRH the Duke of Edinburgh toured Cunard Line's Queen Mary 2 Friday in a royal return to mark the highlight of celebrations for the liner's first decade of service.

The Duke spent more than three hours on board the flagship on his first visit since accompanying Queen Elizabeth at the naming ceremony in January 2004.

The royal party, including Carnival Corp & plc CEO and president Arnold Donald, Cunard Line CEO David Dingle and the liner's naval architect Stephen Payne, was led on its tour by Capt. Kevin Oprey, and visited a number of areas of the ship including the bridge, laundry, crew facilities and several public rooms.

The Duke was invited to unveil a specially-commissioned painting by internationally renowned maritime artist Robert Lloyd. His latest work depicts the flagship at night.

More than 200 guests, including the ship's first master, Commodore Ron Warwick, and the royal party, then had lunch in the Britannia Restaurant.

'We are honoured that His Royal Highness visited our flagship Queen Mary 2 on such a special day in the history of the world's only ocean liner,' Dingle said after the visit. 'For him to have spent time with many of our 1,200 staff has been very exciting and highly appropriate, for it is they who have made the ship the great success she is today. As we reflect on her first decade of excellence we look forward to the next 10 years and we are delighted to have had His Royal Highness taking part in these celebrations with us."

In her first decade, Queen Mary 2 has completed more than 1.5m nautical miles at sea, including 213 trans-Atlantic crossings.

The ship had berthed at Southampton for the first time in four months after her latest world voyage on Friday morning and was to depart on her 214th crossing of the Atlantic under a firework spectacular and with further salutes from her sisters Queen Elizabeth and Queen Victoria.