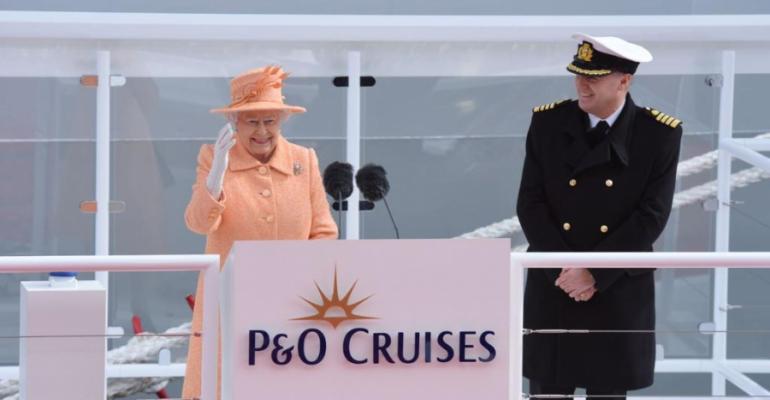 The Queen performs her naming duties

P&O Cruises' Britannia was named by Her Majesty The Queen Tuesday in the vessel's homeport of Southampton. Accompanied by The Duke of Edinburgh, the royal godmother stepped out her Bentley into the springtime sunshine looking resplendent in apricot dress coat and hat.

Prior to the naming over 1,500 guests took their seats quayside for an entertainment programme featuring marching bands from the Irish Guards and Royal Marines, and the Red Hot Chilli Pipers, a harmonious band of trombones, electric guitars and bagpipes playing rock classics.

The master of the ceremony, entertainer Rob Brydon, kept the audience amused with his dry British humour. He introduced some of the stars from hit TV show 'Strictly Come Dancing,' reinforcing the tie up the show enjoys with P&O Cruises, before a group of dancers performed a routine in front of the ship's bow.

Dingle welcomed everyone to the event 'where once again the P&O name is set to make maritime history.'

After naming Britannia the Queen pushed a button to send the Nebuchadnezzar of English sparkling wine crashing into the hull of Britannia, to the rousing applause of all present.

Her Majesty left the ceremony to tour the ship and have lunch on board as classical singer Laura Wright sang, fittingly, 'Rule Britannia.'

Monday night guests were treated to a gala dinner prepared by P&O's resident celebrity chefs and got a chance to see the ship, many for the first time.

Pre-dinner drinks were held the impressive Atrium. Talk of the ship was the stunning focal point Star Burst chandelier.

The widespread verdict is that Britannia is destined to be a huge hit on the British market, and the contemporary interior design by Richmond International was applauded for its fresh approach.

Carnival Corp. & plc ceo Arnold Donald told Seatrade Insider: 'It's incredible. The interior has such flair. It's like a five-star hotel at sea.'

Dingle referred to the ship as a 'true modern classic, combining our classic brand signatures with new innovations.'