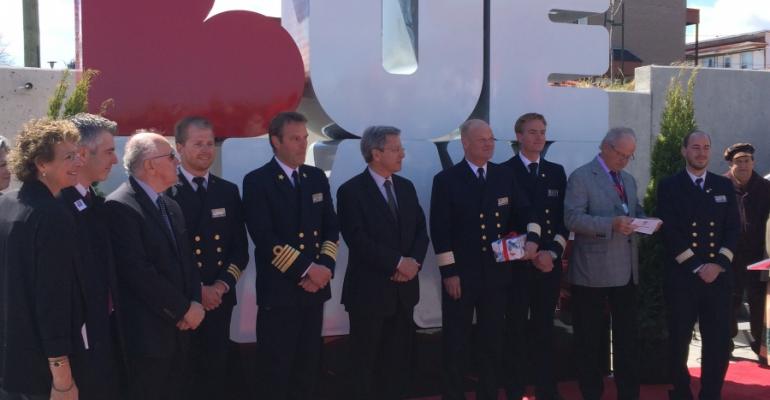 Québec's Saguenay now has sculpted letters just like New York, Amsterdam and Lyon. The mayor of Saguenay and president of Promotion Saguenay, Jean Tremblay, unveiled the letters in the presence of Maasdam Capt. Ane Smit during an occasion that also inaugurated Saguenay’s Port Village area.

Saguenay's logo was created in 2012 by Marc Gauthier, Traitdemarc graphic designer and owner, who was given the direction to convey the message 'fall in love with Saguenay.'

The result, saguenay.ca, is presented in a square shape of three lines with a red heart placed where the second line begins. The logo is the signature of Saguenay’s official website and used in advertisements, brochures, banners and other promotional items.

Saguenay residents are so proud that Promotion Saguenay decided to depict the logo as a sculpture in the Port Village, an effort that involved the work of regional professionals and craftspeople.

'Now visitors can have their picture taken in front of these giant letters to remember Saguenay, and our city's name will travel around the world,' Tremblay said.

During the unveiling, the mayor and Maasdam's captain also inaugurated a monument to honor Saguenay, which has positioned itself as a destination for cruises along the St. Lawrence.

The monument is made from granite and aluminum, two elements from the area. Its form portrays the mountains that descend into the fjord.

A frequent caller at Saguenay, Holland America Line participated in the Bagotville Wharf inauguration ceremonies on Sept. 9, 2008, and those of the international cruise pavilion on Sept. 4, 2009, when Eurodam was alongside.