Sales open for Ovation of the Seas' inaugural Sydney season 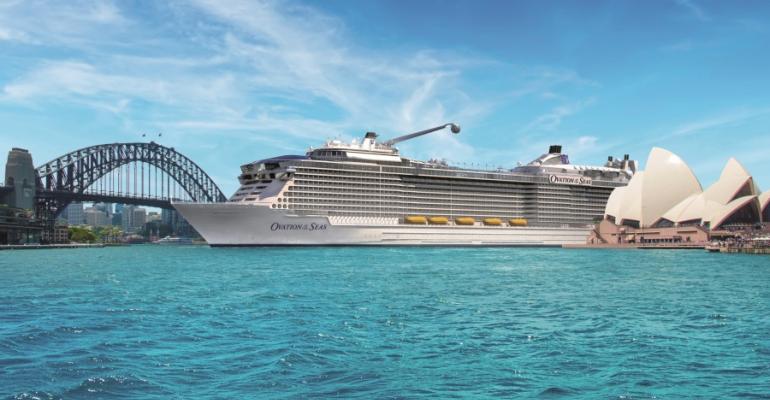 The much anticipated Australasian itineraries for Royal Caribbean International’s A$1.3bn Ovation of the Seas, currently under construction at Meyer Werft, have been released.
As previously reported, more than 20,000 Australians registered interest in receiving details of the inaugural 2016/17 season Down Under.
The 168,666gt Quantum-class ship will arrive in Fremantle on December 6, 2016. She will visit Adelaide and Hobart, arriving in Sydney on December 15 for an overnight before making a 15-night voyage  (including the evening in Sydney) to Hobart, Milford Sound, Dunedin, Wellington, Picton, Tauranga and Auckland.
On December 30, she will make a 10-night New Year cruise from Sydney to Milford Sound, Dunedin, Wellington, Napier and Picton.
On January 9, 2017, she will sail from Sydney on a 14-night school holidays cruise to Bay of Islands, Tauranga, Auckland, Wellington, Picton, Dunedin and Milford Sound.
She will make a 14-night repositioning voyage to Singapore from Sydney on January 23 via Brisbane, Darwin and Kuala Lumpur.
RCI’s commercial director Australia and South East Asia, Sean Treacy, said almost 30,000 passengers are expected to experience Ovation of the Seas, which will offer complimentary skydiving, bumper cars, a surf simulator and the North Star observation capsule that lifts passengers over the sea for 360-degree views.
Treacy said Ovation’s inaugural season, which goes on sale today with launch savings of up to A$750, will inject more than A$20m into the Australian economy.
Copyright © 2023. All rights reserved. Seatrade, a trading name of Informa Markets (UK) Limited.
TAGS: ports & destinations ships
0 comments
Hide comments
Related