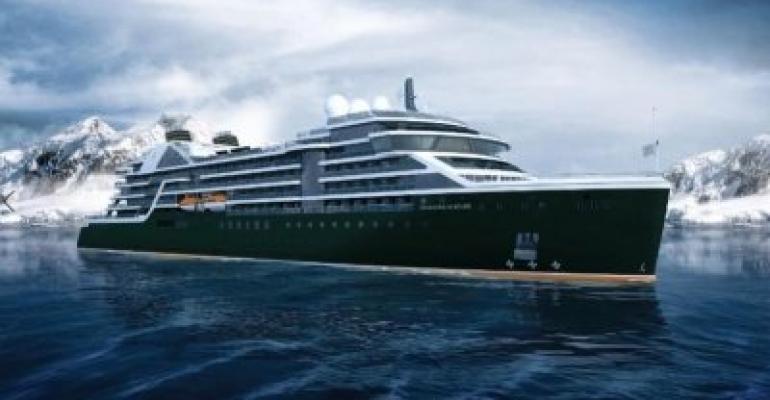 Seabourn Venture, which offers all ocean-front veranda suites, is scheduled to visit more than 150 destinations, including more than 65 new or notable destinations for the brand. Select voyages can be combined to create sailings of up to 30 days.

Following the ship’s delivery in June 2021, Seabourn Venture will begin sailing in Northern Europe and the Arctic. The 10-day pre-inaugural 'Highlights of the English Channel' cruise departing July 5 from Lisbon stops along the northern French coast, England and Belgium before sailing up the Thames River to Greenwich.

This will be followed by the 12-day inaugural 'Northern Isles & The Viking Homeland' voyage from Greenwich to Tromsø, visting the outer British Isles and the Norwegian Fjords.

Seabourn Venture will spend the rest of the season through September exploring the Arctic on five 10- to 15-day voyages to Svalbard, the North Cape and other locations in Norway. Further destinations include Iceland, Greenland and the Canadian Arctic Archipelago in Nunavut.

The ship will then make its way south in October 2021, stopping at locales in Bermuda, the Caribbean, Panama Canal, Colombia, Ecuador, Peru and Chile. During three 10- to 14-day voyages, there will be opportunities to explore in Zodiacs under teeming bird cliffs, kayak, snorkel and visit visit ancient Incan sites.

Seabourn Venture will stop at several new locations in this region, including Pio XI Glacier in the Chilean Fjords and Jorge Montt Glacier in the Aisén region at the north end of the Southern Patagonian Ice Field. Travelers can spend a night in Puerto Natales, where a climb of Dorotea Hill provides a lookout that may include condor sightings.

Beginning in November 2021, Seabourn Venture will spend the austral summer at the southernmost continent with stops at South Georgia and the Falkland Islands. The ship will offer nine voyages, spanning 11 to 22 days. Sailings are from Ushuaia, Argentina, including a 21-day 'Ultimate Holiday Antarctica & South Georgia' cruise departing Dec. 14.

Seabourn Venture will call at multiple new locations in the Falkland Islands such as the remote Saunders Island, the site of Port Egmont, the first British settlement established in 1765, and Steeple Jason Island, a remote nature reserve with an exceptional abundance of wildlife, including the world's largest colony of black-browed albatrosses. At West Point Island, travelers have the opportunity to meet the Napiers, the island’s only occupants (their great uncle established a farm in 1879), while New Island is one of the most remote of the archipelago's inhabited islands and supports some of the largest diversity of wildlife in the Falklands.

Between March and April 2022, Seabourn Venture will sail five seven- to 12-day expedition voyages in the Amazon, visiting three major regions: flooded forests and blackwater tributaries (Manaus to Rio Jutaí), the frontier Amazon (Rio Jutaí to Leticia, Colombia) and 'the seaport in the jungle' (Leticia to Iquitos, Peru).