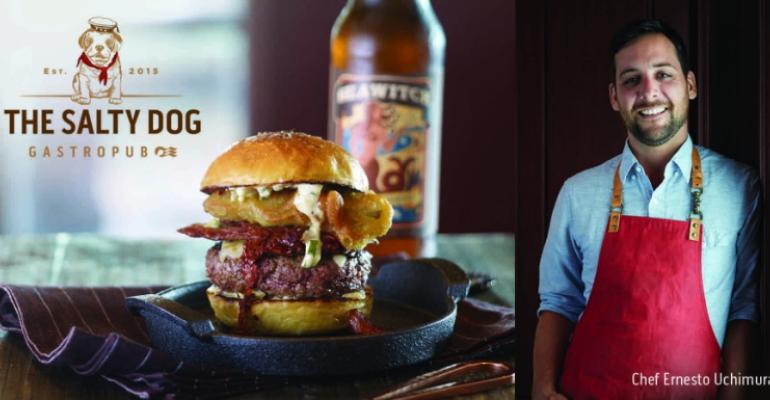 The pièce de résistance is 'The Ernesto' burger from chef Uchimura

Uchimura recently was named 'Chef of the Year: The Comfort Master' by Los Angeles Magazine.

Presented within the Wheelhouse Bar nightly, in refreshed surroundings and with live entertainment, the gastropub menu features a selection of three small plates. These are new twists on classic pub dishes and include choices like Pale Ale Pork Cheeks, Spicy Stout Short Ribs, Wild Mushroom Sauté and Lobster Mac & Cheese.

Adjacent to The Salty Dog Gastropub, also in the Wheelhouse Bar, is an expansive new, international whiskey bar menu. It features some of the best Scotch whiskeys, American bourbons and international whiskeys from areas including Japan, Ireland and Australia. Among the offerings are Johnny Walker Blue, Bakery Hill Classic (Australia), Connemara Whiskey Irish Cask (Ireland) and Hakushu 12 Year (Japan).

The menu offers daily specialized whiskey flights, giving the opportunity to taste and compare selections around the world.

The gastropub and new international whiskey menu have just launched aboard Crown Princess, and will be on board Emerald Princess and Ruby Princess in mid-December. A food charge of $19 applies.

The whiskey menu will also be available in the Wheelhouse Bar aboard Dawn Princess, Sea Princess, Sun Princess, Diamond Princess and Golden Princess by the end of 2015, and aboard all ships with the exception of Pacific Princess by summer 2016.