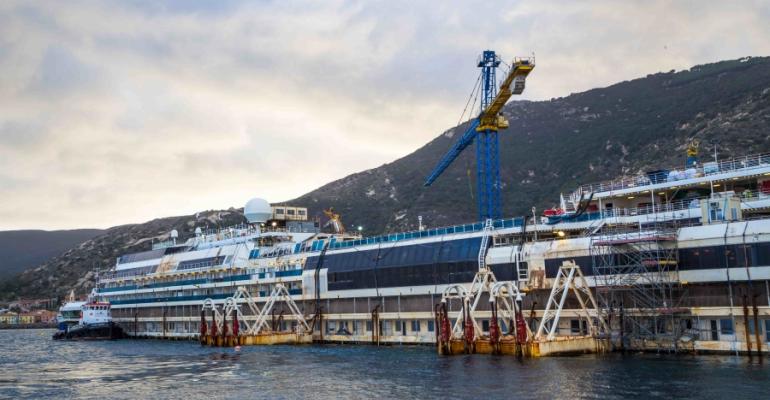 The diver was working on the starboard side of the wreck

Monday update: Costa Crociere provided a psychologist from its care team to assist the family of the fatally injured diver and brought in two experts in post-traumatic shock from the Spanish association of psychologists to counsel workers in Giglio. A diver working on the Costa Concordia wreck died Saturday afternoon following an underwater accident. According to wire service reports from Italy, he is believed to have cut his leg on an underwater metal plate and bled to death.

The Titan Micoperi salvage consortium said the diver, a Spaniard aged 41, was preparing the starboard side of the wreck for the installation of sponsons that will be used for the refloating in the spring. He was immediately assisted by his diving partner and transferred to operations headquarters where paramedics were on hand.

Emergency medical staff arrived at the site and the man was airlifted to hospital by helicopter, according to ANSA news service, which identified him as Israel Franco Moreno, a native of La Coruña.

The incident is being investigated by the authorities.

Both Titan Micoperi and Franco Gabrielli, the head of Italy's Civil Protection Authority and deputy commissioner for the Concordia emergency, expressed condolences to the diver's family.

Gabrielli added his appreciation to the men and women who have worked 'tirelessly in difficult and risky conditions' on the wreck for nearly two years.