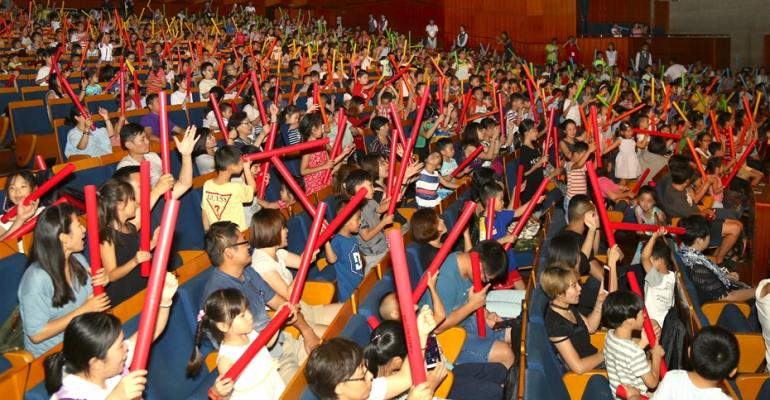 The shows are '200% participatory'

Canada's SAMAJAM, producer and creator of live musical participatory shows that are currently all the rage in China, is taking its act to sea with SkySea Cruise Line.

The shows are '200% participatory.' All audience members get a bag full of instruments and take part.

Starting Wednesday, SAMAJAM will premiere aboard SkySea Golden Era in the ship's 860-seat Grand Theater. SkySea and SAMAJAM will also offer special customized performances with even greater interactivity for corporate events, playing to the line's strength as a leader in the corporate events segment within China's cruise industry.

'SAMAJAM has been creating and producing live musical participatory shows and events for many years, and we are now very happy to bring a new special experience on board SkySea Golden Era,' said Louis Bellemare, founder and CEO of SAMAJAM.

'SAMAJAM is very popular with our Chinese fans,' he added. The company's first show there, 'SAMAJAM Kids Show,' has played more than 350 performances in 30 cities and more than 600 dates are scheduled in 2018.

The shows appeal to all ages, Bellemare said, with localized music selections and 80% of the performance involving audience participation.

Ken Muskat, CEO of SkySea Cruise Line, said SAMAJAM continues the company's reputation for themes and events. This follows the popular 'SkySea Voice,' which launched in 2016, and 'SkySea Forums,' which debuted in 2017.

SAMAJAM will be offered on all 2018 cruises.

Early this month SkySea Golden Era began sailing from Shanghai Baoshan on its first East China deployment since the ship's autumn 2017 dry dock refurbishment. From there Golden Era will operate a series of winter and spring cruises, including the popular winter vacation and Spring Festival holiday.