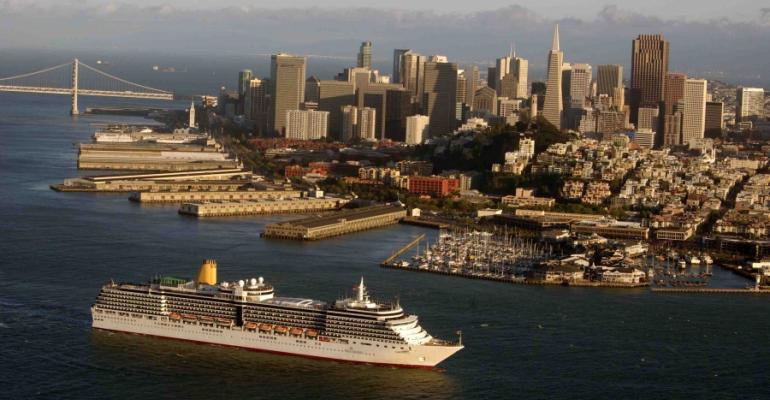 P&O's Arcadia recently stayed two days in San Francisco during its world voyage. The ship is pictured on its May 8, 2011 call

Three Carnival UK ships visited San Francisco in recent weeks as part of their world cruises. They were P&O Cruises' Arcadia and Cunard Line's Queen Elizabeth and Queen Victoria. A fourth member of the Carnival UK fleet, P&O's Aurora, is due next month on an extended voyage.

'San Francisco is delighted to welcome these world cruise ships to our port,' said port executive director Monique Moyer, adding that many of the city’s most popular destinations are just a short walk from the cruise terminals.

The most recent call was Queen Victoria on Feb. 19, as part of a 103-night voyage from Southampton that sailed Jan. 20. The ship was under the command of Capt. Peter Philpott.

Queen Elizabeth arrived in San Francisco on Feb. 7 for an overnight stay. The ship's 112-day circumnavigation from Southampton began Jan. 10 under the command of Capt. Alistair Clark. Queen Elizabeth is visiting 38 ports in 25 countries and sailing more than 38,000 nautical miles.

Arcadia arrived on Jan. 30 for two days at the new James R. Herman Cruise Terminal at Pier 27. Commanded by Capt. Aseem Hashimi, the ship sailed from Southampton on Jan. 6 for a 106-night round-trip voyage.

San Francisco has held historical significance for Cunard since 1942, when the original Queen Elizabeth visited as part of her war duties, and she also underwent a refit. Later, in 1978, Queen Elizabeth 2 made her maiden call, then visited a dozen times more in subsequent years.

In recent years Cunard's contemporary fleet has made numerous calls during world voyages.

'Memorably, flagship Queen Mary 2’s inaugural visit in 2007 was enthusiastically received by thousands of well-wishers who came out to welcome her,' Meadows said, adding that Queen Victoria and Queen Elizabeth 'visit regularly and always receive a gracious greeting.'

P&O’s Aurora is scheduled to visit in March for an overnight call on a 105-night South America and Pacific voyage.