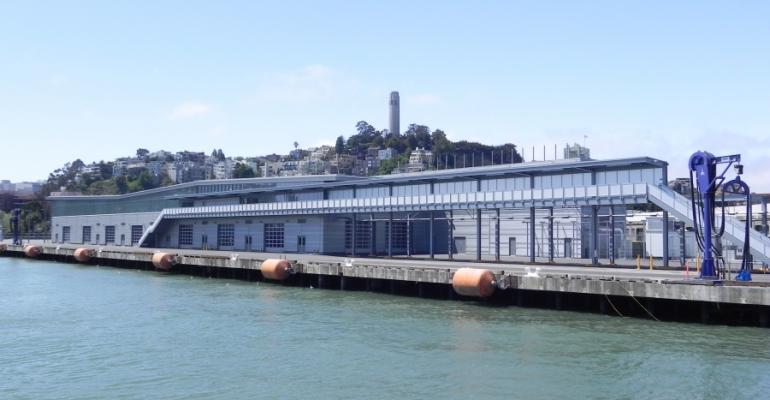 New cruise terminal sits at the foot of Coit Tower and has environmental features including shore power hookup, at right. Since this picture was shot, a new FMT boarding bridge and 'Port of San Francisco' signage were installed

With the arrival of the passenger boarding bridge from FMT in Sweden, San Francisco's new cruise terminal at Pier 27 is close to handling its first ship one week from today followed by a Sept. 25 grand opening. Among the highly flexible facility's novel features is an accordion-like mobile security perimeter that can be removed on non-cruise days to allow public access to the waterfront. Numerous environmental elements are also built in.

The terminal sits at the foot of Telegraph Hill and Coit Tower in a prime waterfront location.

'We are on track for the first cruise ship call (Crown Princess) at the new terminal on Sept. 18,' said Michael Nerney, maritime marketing manager for the port. A week later, Grand Princess will be on hand for the grand opening ceremony of the James R. Herman Cruise Terminal, named for former port commissioner and president of the International Longshore and Warehouse Union.

When phase 1 of the project was completed and dedicated in 2013 for use as the headquarters of the 34th America’s Cup Races, San Francisco Mayor Edwin Lee hailed the facility as a major infrastructure project delivered on time and on budget. He said it would provide a significant economic impact to the city when cruise operations begin.

Included are a fully accessible public park with a mobile security perimeter system to allow for unimpeded waterfront access by the public on non-cruise days in accordance with the city's waterfront preservation/accessibility requirements.

Other key design features include mobile check-in booths and security screening equipment, expansive glazing with waterfront views in all areas of the terminal, mobile separation walls allowing multipurpose use of the Customs and Border Protection primary processing hall and multiple entrance lobbies for simultaneous event use.

Images of the facility are here.