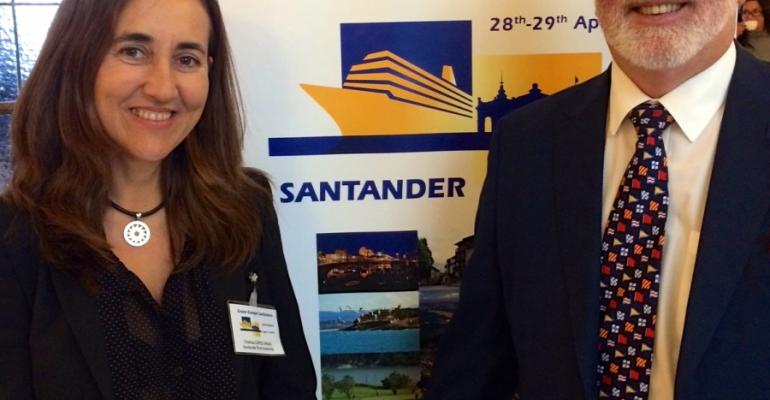 The north Spanish port, in the region of Cantabria, is located in a bay alongside a city chosen by kings, artists and aristocrats for their summer holidays, explained José Joaquin Martinez Sieso, chairman of Port of Santander, at Wednesday's conference opening.

The passenger ship quay can accommodate vessels over 300mtr in length and is also used to handle regular ferry traffic. If a cruise ship needs to berth when the ferry is in port, it is accommodated at a general cargo quay and the port provides a free shuttle bus to the city centre, Cristina Lopez Arias, general manager Santander Port Authority, told Seatrade Insider.

‘Santander is close to better known cruise ports but we are hoping by hosting the Cruise Europe meeting we can showcase our lesser known city and its special nearby attractions to a wider audience and explain our port, city and regional focus on growing tourism, and specifically cruise,’ Martinez Sieso said.

Around 20% to 25% of cruise visitors currently take tours to Bilbao (one hour by bus) with the Guggenheim Museum a big draw, whilst the remainder stay in the Cantabria region where the three most popular attractions are the Caves of Altamira, the Natural Park of Cabárceno and Santander city sightseeing, Lopez Arias said.

The Natural Park of Cabárceno, located in a former open cast iron-ore mine is the size of 750 soccer pitches and home to more than 100 species of animals, including brown bears, white rhinos, elephants and several endangered species which are given freedom to roam. The natural landscape resembles Steven Spielberg’s movie, 'Jurassic Park.'

The region boasts 16 UNESCO World Heritage Site caves containing stone age art but the Neocave and Museum in Altamira is perhaps Santander’s jewel in the crown.

Although the actual cave housing stone carvings and painted bison, deer, horses, goats and signs, thought to be drawn around 18,500 years ago is currently closed whilst research continues, the on-site Museum of Altamira displays and explains the area’s Palaeolithic archaeological heritage and features an exact replica of the caves so visitors can get a sense of the amazing paintings discovered in 1879  by Marcelino Sanz Sautuola and his young daughter.

Recent scientific studies using high-tech instruments have calculated the cave could date back to between  37,000 and 41,000 years, which makes the content even more important to scientists and archaeologists.

The cruise berth is within walking distance of Santander. It is a Roman city, but virtually destroyed by fire in 1941 so many of the buildings are from the last century although the city hall and 13th century Gothic cathedral built of stone survived. There are plenty of shops, cafés and restaurants for passengers to sample typical local food including fresh anchovies and potato croquettes.

Looking to create its own ‘Guggenheim effect’ to increase its visitor appeal, Santander is investing in three major tourism projects. Under construction are an art and culture centre funded by the Botin Foundation and a second Queen Sofia Art Centre. Plus, there are plans to enlarge the Prehistoric Museum.