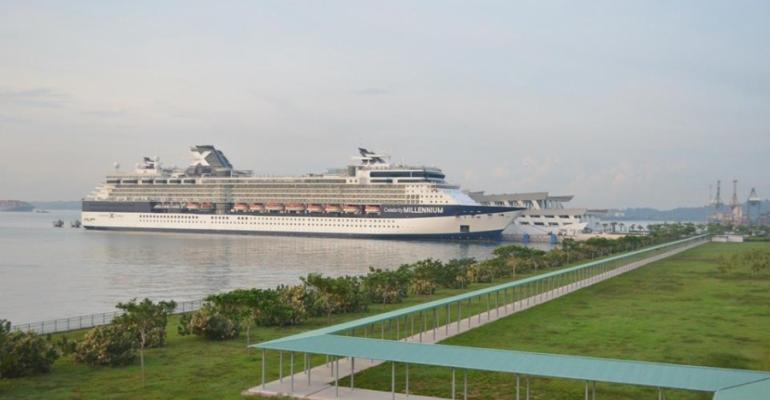 New linkway from ship to metro station at MBCC

SATS-Creuers, terminal operator of Marina Bay Cruise Centre recently rolled out a comprehensive range of enhancements to the Singapore cruise facility, aimed at taking passengers from ship-to-kerb in just 15 minutes. The enhancements were implemented over the last six months at a cost of some S$7m.

The improvements come as Singapore’s cruise industry continues to see strong growth potential, with year-on-year growth in 2013 reaching 13%, according to the Singapore Tourism Board.

Comprising a mix of infrastructural as well as process improvements, the enhancements include: the installation of a fourth passenger boarding bridge; the addition of two new X-ray machines in the arrival hall to increase customs screening throughput; doubling the luggage trollies available for passenger use to 800 and the removal of the feature wall at the level 1 Arrival Hall Lobby to expand the passenger holding area and improve passenger flow.

New embarkation check-in counters have also been added, whilst the luggage conveyor system is increased to handling 1,200 bags per hour, up from 400.

MBCC has also worked with taxi drivers to ensure better availability, the launch of a mobile application which has seen over 2,000 drivers sign up to date for notifications of incoming cruise ships and modifications to the taxi stand to improve turnaround time in passenger traffic during peak periods and expanded queuing space for passengers.

Bob Chi, ceo SATS-Creuers said, ‘we worked closely with all our stakeholders – including government agencies, cruise lines, their handlers – to implement this suite of improvements. We are confident they will provide passengers a seamless experience, while also positioning ourselves for future growth.'

Also assisting access to and from MBCC is a new MRT (metro) station located 250mtr from the terminal which started operations on November 23. With the launch of Marina South Pier station, guests and crew can now easily access almost any area in Singapore at an affordable rate.