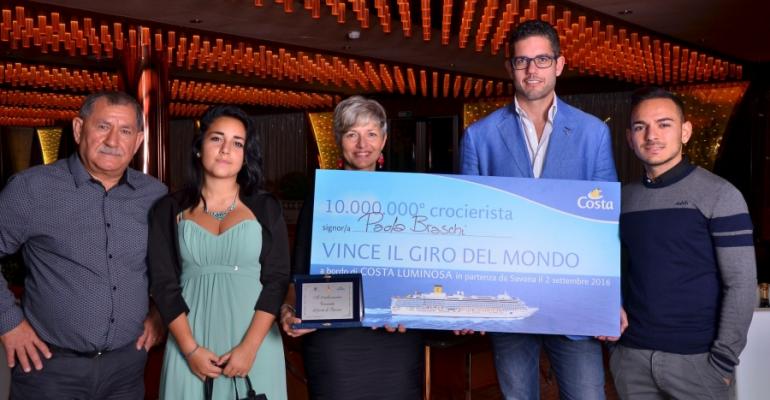 The 10 millionth cruise passenger in Savona, Paola Braschi, with her family, awarded by Neil Palomba, president of Costa Cruises

An Italian, Paola Braschi from Genoa, became the 10 millionth cruise passenger in Savona since the arrival of the first ship Costa Riviera, in 1996.

Braschi, on-board Costa Diadema with her husband and two children has been awarded a cabin on Costa Luminosa's 98-day world cruise departing from Savona on September 2, 2016.

The Municipality of Savona presented Braschi a free pass to visit all of Savona's museums valid to the end of 2016.

'We are delighted to celebrate this historical achievement,' declared Neil Palomba, president of Costa Cruises. 'It is a clear indicator of how much Savona and Costa Cruises have grown together over nearly 20 years of working effectively side-by-side. Today, Savona is our number one port in the world,' he added.

President of the Port Authority of Savona, Gian Luigi Miazza, praised the commitment and efforts of the more than 200 employees who take care of each and every detail, and of the entire port community.

'Slightly less than twenty years ago it was unimaginable to think that today we would be celebrating the ten millionth passenger linked to the cruise activities that today can be considered a crowning achievement for the port of Savona. This is an important milestone not only in terms of figures, but above all as regards our city’s development potential,' declared the Mayor of Savona, Federico Berruti.

Costa has been calling regularly at Savona since 1996. Important milestones during this period of growth include the inauguration of the Palacrociere terminal in 2003, the construction of the third berth in 2008 and the opening of the second Palacrociere terminal in November 2014. Overall, from 2003 to 2015, Costa Cruises and the Port Authority of Savona have invested nearly €30m in cruise infrastructure.