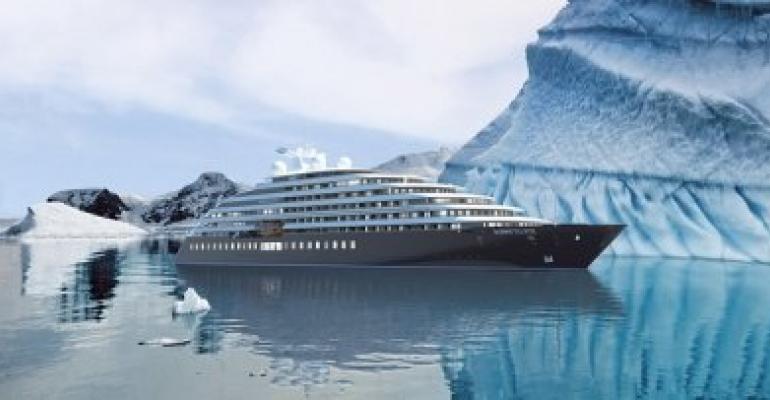 This rendering depicts Scenic Eclipse in Antarctica, where it is due to operate for the 2019/20 season
Newbuild Scenic Eclipse was taken under tow to Viktor Lenac shipyard in Croatia in late April as part of a scheduled drydock.

During approximately 10 days there, standard works will be conducted including degreasing and high pressure washing of the hull, application of final anti-corrosive coats and final inspection processes.

Then Scenic Eclipse is scheduled to return to Uljanik shipyard for final preparations leading to sea trials in June and delivery on Aug. 15.

The original August 2018 delivery date was moved back several times due to Uljanik shipyard's bankruptcy.

'We remain confident of our launch date and look forward to welcoming our first guests on board for [the] voyage out of Reykjavik,' Scenic Luxury Cruises & Tours stated in an Eclipse progress report.

The 'Icelandic & Atlantic Canadian' exploration sails from Reykjavik to Québec. The ship then heads down the eastern seaboard of North America to the Caribbean, and Central and South America, before spending several months in Antarctica.

The 228-passenger Scenic Eclipse offers all-veranda suites ranging from 345 square feet to 2,659 square feet, with butler service in all accommodations.

Ten dining options range from Asian fusion to French fine dining to a chef’s table to a poolside buffet. A 5,920-square-foot spa includes a well-equipped gym and separate yoga and Pilates studio. There are indoor and outdoor plunge pools and a 240-seat theater for entertainment and lectures.

Two six-guest helicopters and one six-guest submarine, capable of reaching depths of nearly 1,000 feet, are among the exploration tools.

The ship is built to Polar Class 6 standard and has zero-speed stabilizer fins, 50% larger than standard to provide greater stability. A GPS dynamic positioning system allows for stationary positioning without an anchor.