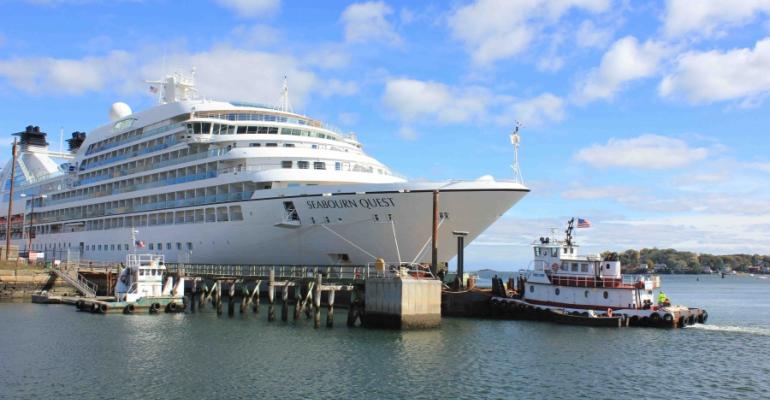 Seabourn Quest alongside in Salem

The call went well, according to Seabourn spokeswoman Irene Lui. 'Our guests enjoyed the port very much and being part of a maiden call, and it was particularly fun for our guests being in Salem so close to Halloween.'

'It was a very successful visit and we hope the first of many,' said Kathleen Winn, Salem's deputy director, planning and community development. 'We still have work to do,' she added, but 'It should only get better from here.'

About half the ship booked shore excursions almost everyone went ashore out of the 458 on board, the ship's destinations services manager said.. Salem's attractions include the Salem Witch Museum, The House of the Seven Gables, the Peabody Essex Museum and Nathaniel Hawthorne's birthplace.

'They came on a very busy weekend for Salem—October is our busiest month due to Halloween, but we were thrilled that they came,' Winn said.

Winn and Destination Salem executive director Kate Fox have been talking with cruise lines and participating in the Canada/New England Cruise Symposium in recent years. During the 2013 symposium in nearby Boston, representatives of attractions like The House of the Seven Gables and the Salem Ferry were present.

A couple years ago Mayor Driscoll, a seasoned cruiser since childhood, went to Seattle to meet with Holland America Line and Seabourn officials.

Seabourn Quest has confirmed further Salem calls in 2015 and 2016.