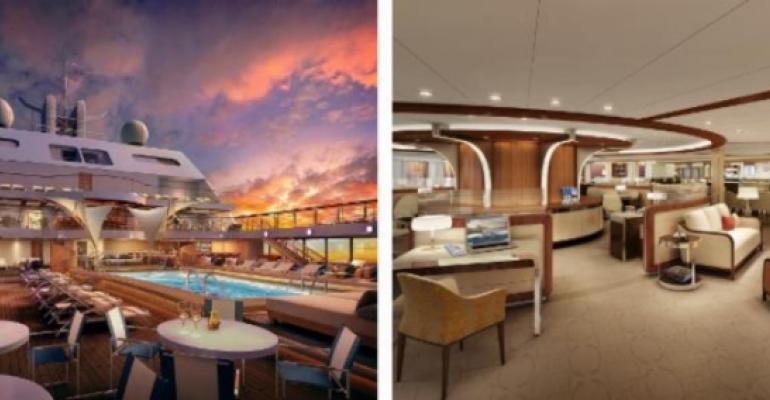 Seabourn Encore - to debut in December 2016

The new Seabourn Encore will officially debut with a gala naming ceremony in Singapore on Jan. 7, 2017. Before that, the ship will operate two pre-inaugural sailings. Sales opened Tuesday for the ship's maiden season, encompassing voyages along the coasts of Arabia and India, Southeast Asia and Australia/New Zealand between December 2016 and April 2017.

Following its delivery in December 2016, Seabourn Encore will sail a pair of pre-inaugural cruises before the official maiden voyage from Singapore. On Dec. 4, the ship will embark on a 16-day cruise from Athens to Dubai, visiting destinations in Israel, Jordan and Oman. This will be followed by an 18-day holiday voyage from Dubai on Dec. 20, sailing to Arabia, India and Southeast Asia before arriving at Singapore.

After the Jan. 7 naming in Singapore, Seabourn Encore will embark on its 10-day official maiden voyage to Bali, including stops at Surabaya, Java; Celukan Bawang, Bali; and Slawi Bay, Komodo, Indonesia.

A series of 16-day voyages cruising the Pacific Rim in Australia and New Zealand follow. Seabourn Encore will call at Sydney and Melbourne and both islands of New Zealand. The ship will visit popular ports such as Auckland and Wellington, and explore New Zealand's southernmost city, Oban on Stewart Island, and charming Picton, the gateway to the Marlborough Sound.

In April 2017, Seabourn Encore will return to Europe with two 16- and 18-day Arabia and India voyages. The ship will spend summer in the eastern Mediterranean on a series of seven-day cruises.