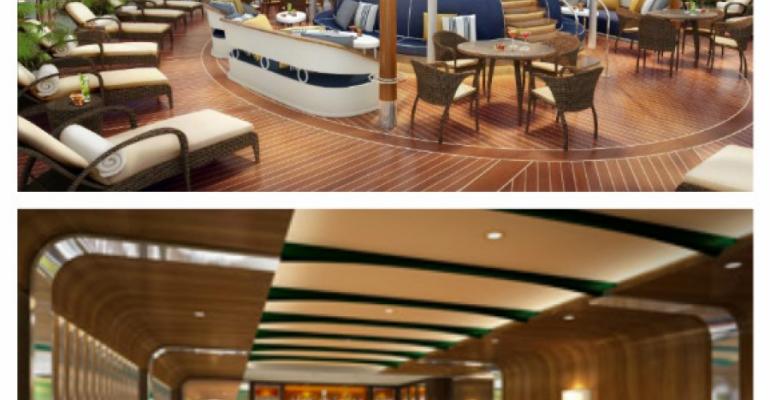 The Retreat, top, and The Grill by Thomas Keller (Renderings: Seabourn)

The Retreat is a new cabana-ringed sanctuary that will debut on Seabourn Encore when the ship enters service in December. Seabourn introduced the space as well as the design for The Grill by Thomas Keller, going fleetwide, and a new partnership with a noted mixologist, at Seatrade Cruise Global this week.

Located forward on Deck 12 where the putting green is found on the existing vessels, The Retreat will be outfitted with custom details and modern elements to create what Seabourn called 'the ultimate serene space.' It's shielded from sun and wind by a flower-shaped canopy and ringed with 15 private cabanas and a spa treatment cabana.

The Retreat is located around a whirlpool with step-up access and has space for up to 28 people. Amenities include fresh fruit baskets, premium sun lotions, Evian mist spray, plush towels and personalized bathrobes. A dedicated concierge will be on hand.

Users can stretch out on sun loungers, perch on a bar stool or take a table seat for champagne and cocktails. A selection of bites can be ordered from a healthy spa menu.

Cabanas can be reserved for a full day via the Guest Service Specialists at Seabourn Square. Rates will begin at $350 per couple.

In a partnership with the noted mixologist Brian Van Flandern, Seabourn is transforming the spirits across its fleet with upgraded bar offerings and new cocktail menus. Van Flandern already has been elevating the bar ingredients and bar ware and educating and training staff. He's also creating a menu of cocktails exclusive to the line.

Hailed by the Food Network hailed as 'America's Top Mixologist,' Van Flandern was part of the opening team for Thomas Keller's restaurant Per Se in New York City in 2004. As head barman, he applied the chef's philosophy of flavor profiling behind the bar and discovered techniques to create well-balanced, food-friendly cocktails.

For Seabourn Van Flandern will use fresh produce, botanicals and flavor profiling to create handcrafted cocktails that take advantage of the markets in destinations the ships visit. Plus, he'll be pairing cocktails with food.

An expanded spirits list will include more premium and ultra-premium whiskeys, tequilas and other spirits, such as an 18-year-old Japanese malt whisky and a rare Armagnac Darroze 1968, according to Seabourn's John Delaney, svp global marketing and sales.

Meanwhile, The Grill by Thomas Keller will first appear on Seabourn Quest in May after its drydock, then on Seabourn Encore, followed by the other ships. It replaces Restaurant 2, a small plates venue.

Seabourn president Rick Meadows described the new dinner spot as a 'classic American chophouse.' Lobster thermidor and creamed spinach will be among the a la carte items. There will be tableside preparations of Caesar salad and ice cream sundaes, too.

The Grill by Thomas Keller will have 44 seats on the current Seabourn ships and 94 seats on Seabourn Encore, including an alfresco dining area.

The design is by Adam Tihany, who designed Keller's Per Se and is the interior designer for Seabourn Encore.

'This is a portrait of a chef; it's not a restaurant on a ship,' Tihany said.

During Seabourn's news conference at Seatrade Cruise Global, the designer added that while his company works on lots of projects around the world, Seabourn Encore has 'captured my true inner imagination.'

The ship is 'totally personal. Every single detail, every curve, was picked thinking of you, the passenger,' Tihany said.