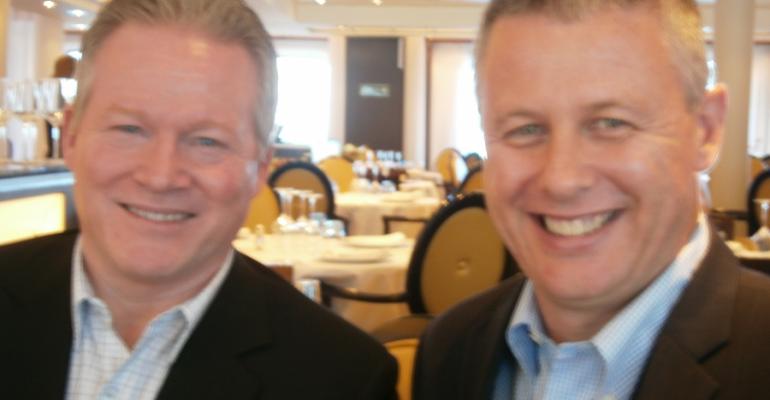 John Delaney, left, with Tony Archbold who set up the dedicated Seabourn office in Sydney in 2011

At a lunch and tour for media and key industry partners on board Seabourn Odyssey in Sydney today, Seabourn svp global marketing and sales, John Delaney, said Australia is neck-and-neck with the UK to become the company’s second source market after North America.

Delaney, who arrived in Sydney earlier this week on his first visit to Australia, will join Odyssey’s sailing to Brisbane tomorrow where he will showcase the Seabourn product to the local industry.

Seabourn Odyssey is on a 77-day circumnavigation of the South Pacific which left Los Angeles on January 4 and returns March 21.

Delaney told guests today that Seabourn Sojourn will be in Singapore for the naming of the company’s 604-passenger Seabourn Encore on January 7, 2017.

He said Seabourn has the exclusive use of Marina Bay Cruise Centre’s two-berth terminal for the occasion.

‘We are planning a wonderful, wonderful inaugural party,’ he said.

Seabourn Encore will sail on her official inaugural voyage to Bali, followed by a 16-day cruise from Bali to Sydney on January 17, calling at Darwin (January 22), Cairns (January 26 and 27), Townsville (January 28) and Hamilton Island (January 29). The 40,350gt ship will then make the company’s maiden call at Mooloolaba on Queensland’s Sunshine Coast (January 31).

On February 2 Seabourn Encore will make a 16-day cruise from Sydney to Auckland which will include the company’s maiden call at Phillip Island in Victoria (February 4).

She will make a 16-day return cruise to Sydney from Auckland on February 18 and on March 6 will return to Singapore via Mooloolaba, Hamilton Island, Townsville, Cairns and Darwin.