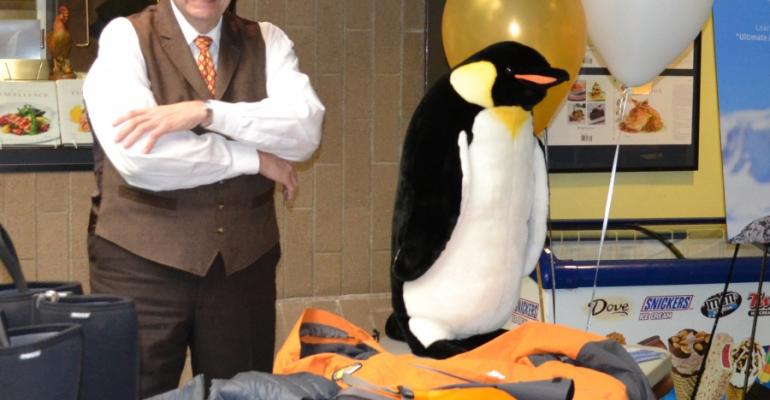 Seabourn evangelist Bruce Good is retiring after a colorful career—a large part of it in luxury and expedition cruising, his second calling after music.

Good has been with Seabourn since 1996, most recently directing public relations during the line's three-ship expansion. He also touted Queen Mary 2 for Cunard, worked in marketing, shore excursions, enrichment and itinerary planning at Royal Cruise Line, and was an expedition leader for Lindblad in some very exotic settings.

'I have endeavored for 18 years to accurately describe the wonderfulness that happens on a Seabourn ship, believing that if I could do that, people would pay any amount to experience it. Made some small progress, I believe,' Good said, with characteristic modesty. He's proud of how the new Seabourn ships and their staffs have proved themselves to an inherently skeptical audience of Seabourn loyalists.

'Bruce shares a genuine passion for the Seabourn brand that was evident in everything he did—whether it was speaking to the media, interacting with the agent community or simply helping a colleague in the office,' Seabourn president Rick Meadows said. 'He is the consummate professional and truly cared about the company and his co-workers.'

Good migrated with Seabourn from its original home in San Francisco to Miami for its Cunard integration then demerger, and its move to Seattle under Holland America Line.

In an email, past Seabourn president and ceo Pamela Conover said Good played a key role in the continuity of the Seabourn brand through those changes: 'Not only did he have the history, but he had a passion for the guest experience. He understood the fabric of the interrelationship between the people who deliver the service (the crew) and those who receive it (the guest).'

Now Good plans to move down the coast to Santa Barbara, Calif., where he'll live half a block from the beach and within an hour of his daughter and 5-year-old granddaughter.

'I will miss Bruce dearly—personally and professionally,' said Irene Lui, senior manager, public relations and social media at Seabourn, who assumes all public relations responsibilities and duties. Lui considers Good a 'great mentor, and it’s been an honor working for him, with him. He loves to tell the Seabourn story; his enthusiasm for the Seabourn product always shines through. He’s a very classy gentleman, always smiling—hardly anything ever fazes him.'

Good spent the 1960s as a musician, then from 1969 to 1981 was in songwriting, record production and artist management in San Francisco, working with international stars such as Herbie Hancock and the Pointer Sisters, both Grammy Award winners.

He quit that to see if he could make a living as a writer, and taught SCUBA diving to help with the rent. His first job in the cruise business was as a dive master aboard Lindblad Explorer in the Maldives and Seychelles islands. He fell in love with this and became expedition leader/cruise director on Polaris for several years, sailing in West Africa, the Mediterranean, Western Europe, the Norwegian Arctic and the Red Sea to countries like Yemen, Egypt and Jordan.

Susan Pierres, a noted travel photographer and journalist, met Good 30 years ago when she joined Polaris in Civitavecchia as assistant expedition leader for a season of pioneering sailings along Africa's west coast, up the Gambia River, to the Bijagos Islands off Guinea Bissau and the 'wild and wonderful' São Tomé.

Pierres recalled how Good led a nightly passenger briefing on the next day's anticipated discoveries, emphasizing respect for nature and any human encounters, then entertained visiting dignitaries of the host African nations for cocktails and dinner.

'By day Bruce was the epitome of an adventure traveler, bandanna around his brow, steering the Zodiacs into shallow inlets and creeks seeking out rare saltwater hippos and the extraordinary bird life of the region, graciously meeting tribal chiefs, including those of Alex Haley’s ancestral village of Juffereh on the Gambia River,' Pierres recounted. Sometimes Good brought tribal leaders on board for their first experience of a 'big boat' and oddities like silverware.

'Any and all difficulties encountered—and there were many—were easily resolved by our fearless and unflappable leader,' Pierres said. 'In my mind [Good] represented the world of discovery, of conservation and ecology, and it was a while before I could imagine him in the corporate world of cruise ships; yet he thrived there as well elaborating to the press on the sophisticated pleasures of luxury cruising, unflappable, charming and gentlemanly as ever.'

Good came ashore in 1985 and worked for Royal Cruise Line in San Francisco, handling shore excursions for the Americas/Pacific, enrichment and the host program as well as writing for marketing and, ultimately, itinerary planning—including for Queen Odyssey, which became Seabourn Legend.

Following the demise of Royal Cruise Line in 1996, he started at Seabourn in shore excursion planning, then marketing services. When Seabourn moved to Miami and merged with Cunard in 1998, he was asked to take over public relations and quipped that he 'nearly ruptured my hyperbol-ator writing releases for [Cunard president and ceo] Larry Pimentel during the building of QM2.'

Good settled in with Seabourn after its demerger from Cunard and helped promote the Odyssey-class newbuilds. He relocated west again in 2010 with Seabourn's move to HAL in Seattle.

'I believe that people should be forced to travel, at gunpoint if necessary,' Good joked this week, 'until they come to understand how good it is for them.'

He added: 'I love people who dream and people who follow their dreams, and the hardworking people who make their livings helping make those dreams come true.'