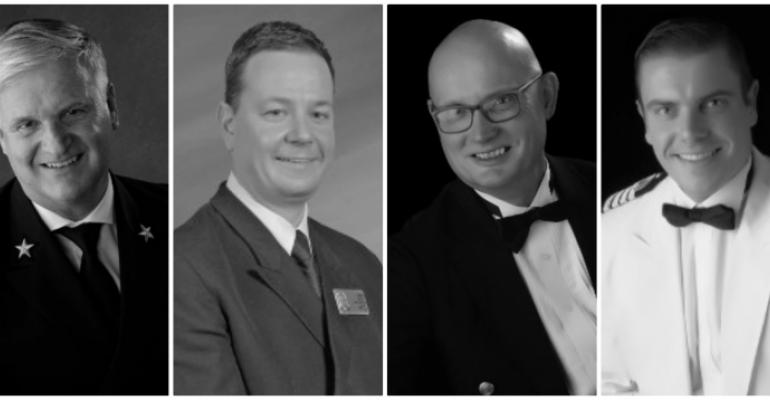 De Boer has been with the company since 1994 when he joined the former Nieuw Amsterdam, and rose through the ranks from second officer to captain. He has been master of Statendam, Zaandam, Rotterdam, Amsterdam and Eurodam, and served on Maasdam, Ryndam, Noordam, Nieuw Amsterdam and Koningsdam.

For the past three years de Boer represented HAL as a fleet captain at Maritime Quality Assurance, Carnival Corp. & plc. In this role he advanced the bridge resource management policies and procedures across the Carnival brands.

Hailing from the Netherlands, de Boer resides in The Hague. He enjoys concerts, museums, flying light aircraft (he holds a commercial pilot’s license), sailing, photography and bicycling. He earned a navigation degree from the Maritime Institute Willem Barentsz in Terschelling, Netherlands.

Since joining HAL in 2002, Habets has sailed on all the company’s ships, including the former Ryndam and Statendam. His first ship was Maasdam, and most recently he worked aboard Koningsdam. Habets began as an assistant maître d’ and worked his way up to hotel director.

A native of the Netherlands, he graduated from the Hoge Hotel School in Maastricht with a degree in hospitality management.

Beirnaert has been with HAL since 2006 and worked on Rotterdam, Eurodam, Nieuw Amsterdam and Koningsdam. He was also a member of the senior team to introduce Koningsdam.

Hailing from Gent, Belgium, Beirnaert studied at the Hogere Zeevaart school in Antwerp, and worked for freight company Ecuadorian Line and on dredging ships in Dubai on the Palm Jumeirah Project before joining Holland America Line. He resides in Las Vegas.

Van Loenen joined HAL in 2002 as a second engineer after working on container ships, cargo ships and chemical parcel tankers. He first sailed on Amsterdam and also has served on Maasdam, Ryndam, Volendam, Zaandam, Oosterdam, Zaandam and Zuiderdam.

Prior to being named to the Nieuw Statendam team he was chief engineer on Koningsdam.

Van Loenen graduated from the Maritime Institute Willem Barentsz in Terschelling. He and his wife live in Makkum, Friesland, in the Netherlands with their three children.

Dutch native Kramer went to Nautical College in Den Helder and studied to be a shipboard engineer. Before signing on with HAL in 2004, he worked on cargo ships and in a steel factory.

Kramer came to Holland America as an environmental officer, and he has worked on all classes of ships except those of the Pinnacle class; Nieuw Statendam will be the first. He has served on Statendam, Ryndam, Maasdam, Rotterdam, Volendam, Zaandam, Amsterdam, Prinsendam, Zuiderdam, Oosterdam, Westerdam, Eurodam and Nieuw Amsterdam.

When he’s not on board, Kramer lives in Aruba with his wife where he spends time riding his Harley Davidson and working to restore his classic 1957 Chevrolet.

The 99,500gt Nieuw Statendam is under construction at Fincantieri’s Marghera yard and due for delivery Dec. 1. During its inaugural year, the ship will explore the Caribbean in winter and northern Europe, Iceland and the Mediterranean in summer.