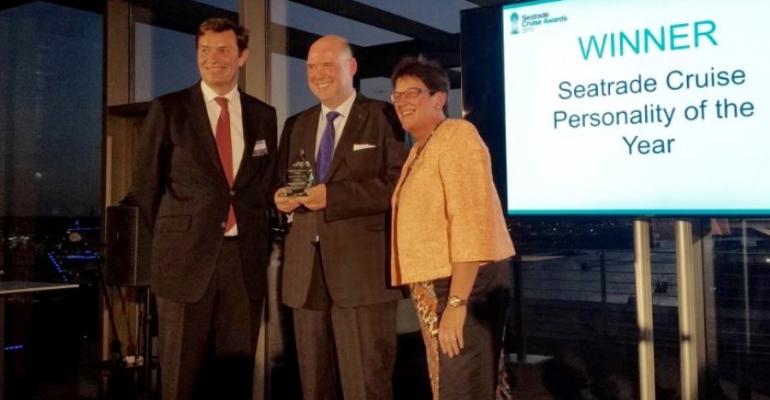 Michael Ungerer, centre, receives the Seatrade Cruise Personality of the Year Award, sponsored by V.Ships Leisure. He is flanked by V.Ships' Per Bjørnsen and Seatrade's Mary Bond

Destination of the Year went to Liverpool, and Port of the Year is Passenger Terminal Amsterdam. Supplier of the Year is The Image Group, the Environmental Initiative Award went to AIDA Cruises and Becker Marine Systems (joint winners) and the Innovative Shorex Award to Aloschi Bros' 'Pope's Summer Residence & Vatican.'

The winners were selected from three shortlisted finalists in each category by an independent judging panel.

Entries shortlisted for Port of the Year were Port Authority of Leixões and Port of San Francisco, while Cruise Baltic and Guadeloupe Islands Tourist Board were finalists for Destination of the Year. Supplier of the Year finalists were Cruise and Passenger Services and Tura Turizm. Stericycle was shortlisted for the Environmental Initiative Award. Finalists for the Innovative Shorex Award were Akorn/Abercrombie & Kent's 'The Botanical Ark' and American Queen Steamboat Co./Shore Excursions of America's 'On the Front Lines of the Civil War.'

Michael Ungerer, past president of AIDA Cruises, chairman of CLIA Deutschland and chief operations officer, shared services, Carnival Asia, has played a key role in developing the German cruise market for 18 years. He was selected by Seatrade and Cruise Personality of the Year Award sponsor V.Ships Leisure from nominations received for the significant role he has played in raising environmental stewardship, climate and environmental protection within his company and the wider cruise sector.

'I am extremely honoured to receive this award but it is not a one man show, and I would like to share it with my peers and colleagues, as without them this would not have been possible,' Ungerer said.

The Seatrade Lifetime Achievement Award was presented to Jochen Deerberg, whose Deerberg-Systems was established in Oldenburg, Germany, in 1979 and grew into a pioneering company for sustainable waste management. On several occasions Deerberg initiated and hosted conferences to raise waste management awareness and to exchange knowledge about best practices. Early on he fostered an innovative holistic approach.