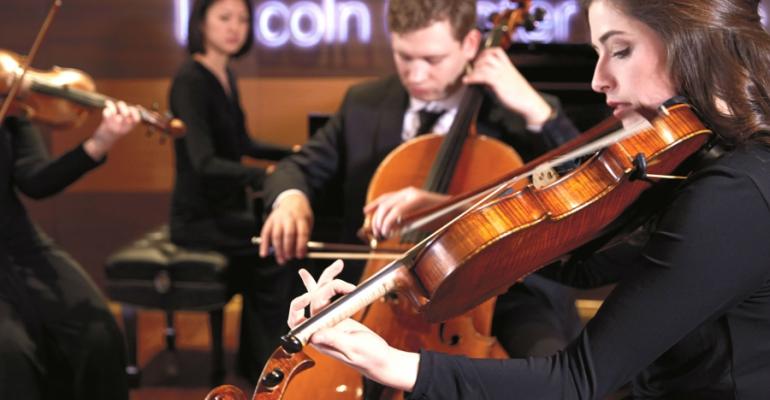 After welcome cocktails, created by mixologist DaleDeGroff and served in the new Gallery Bar, visitors had the chance to experience the Music Walk featuring two new venues, Lincoln Centre Stage and Billboard Onboard, as well as the already existing B.B.King's Blues Club. 'These three unique music venues each offer a different style of live music all within a 500ft walk,' said Ashford.

A recital at the Lincoln Center Stage heard the ensemble playing a diverse musical set from Brahms to Radiohead, whilst the dualing piano duet in Billboard Onboard, featured songs from the Jackson Five, Queen and Journey.

Lunch, taken in the Pinnacle Grill, centred on three courses from feature restaurants on new ship Koningsdam arriving this spring. A sprouting salad of golden beets from Dinner at the CulineryArts Center an immersive farm-to-table experience was followed by Bouillabaisse Marseillaise from seafood restaurant  Sel de Mer, and completed by a wasabi and soy crusted beef tenderloin from Southeast Asia eaterie, Tamarind.

Dessert and coffees were taken in B.B. King's Blues Club during a live performance of Soul Man.

The work on Eurodam was carried out during a 14-day drydock in December and the first HAL ship to undergo extensive enhancements as part of a $300m brand enhancement initiative announced last year.

Next up, Oosterdam is scheduled to receive these venues during its April drydock, and other Vista- and Signature-class ships will get the additions over the next few years.