Seatrade Cruise Med is bound for Málaga in 2020 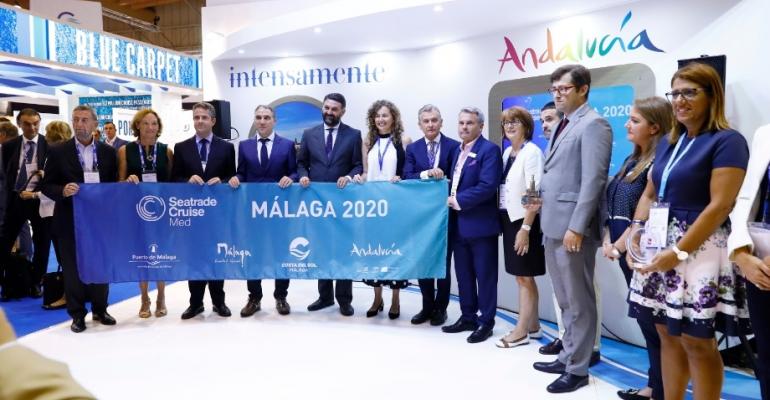 The Port of Lisbon hands over the Seatrade Cruise Med banner to 2020 event host, Málaga
Seatrade Cruise Med—the largest cruise industry event focused on the Mediterranean and its adjoining seas—will move to Málaga, Spain, in 2020, it was announced today on the final day of the 2018 event in Lisbon.

A Mediterranean port with nearly 3,000 years of history, Málaga will become the 13th destination to host Seatrade Cruise Med, which is held biennially in different locations around the region and includes an international exhibition, conference program and vast networking opportunities.

According to Vanessa Stephens, global events director of Seatrade, organisers of the event: 'We are delighted to announce today that the next destination for Seatrade Cruise Med is Málaga, the capital city of the Costa del Sol.

'We have visited the magnificent Trade Fairs and Congress Center of Málaga and know that the 2020 event will be an exciting destination to work with, thanks to the efforts of the hosts.'

A popular cruise destination, Málaga is strategically located in southern Spain between the provinces of Granada and Cadiz, and neighboring the provinces of Seville and Córdoba, all of which have UNESCO World Heritage Sites.

Málaga Cruise Port manages all three cruise terminals of the port, which is located 15 minutes away from Málaga International Airport, served by flights from Europe and around the world. The city's port facilities, hotels and airport make for a world-class international homeport.

Terminal A, Terminal B and the Palm Grove Terminal can handle cruise ships of any size. Larger vessels dock in the eastern area and smaller ships at the inner basin next to the Palm Grove waterfront, within five minutes' walking distance of the cathedral. There are full turnaround and transit services as well as a small shopping center offering duty-free and souvenir items. A shuttle service operates to the city center.

All three terminals have been designed with the latest safety and security requirements, and each fully complies with the International Ship and Port Facility Security Code. Terminal A is equipped with two boarding bridges designed for the latest generation of ships and has hosted vessels as large as Royal Caribbean's Oasis class. Terminal B has a modern boarding bridge and provides full turnaround and transit services. Palm Grove Terminal handles small and mid-sized ships up to 200 meters.