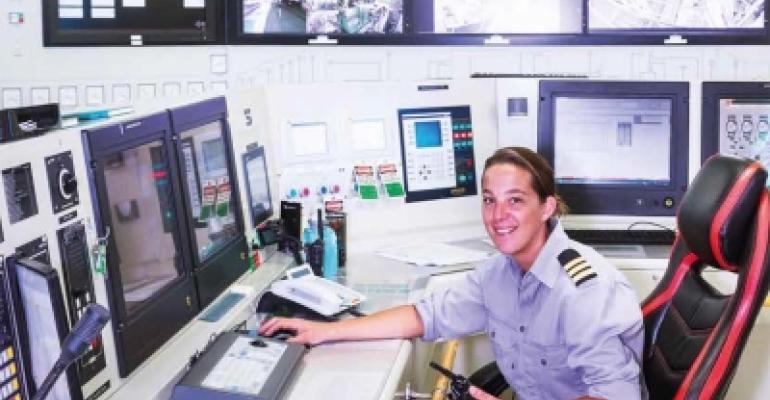 The rise of women in nontraditional shipboard roles—deck and technical—features as the cover story in Seatrade Cruise Review's latest edition, hot off the press for Seatrade Cruise Global this week in Miami Beach.
Resources

Slowly but surely, more women are wearing the stripes at sea, in jobs from captain to engineer. Lines like Celebrity Cruises stand out for actively recruiting and developing women in seafaring roles but across the industry, their numbers are growing as more females set their sights on seafaring careers.

What cruise lines are doing to foster greater diversity on board and why this is important, the challenges faced and what women bring to their jobs are all examined in a four-page report, 'Women wear the stripes,' with a cover photo of Holland America Line Second Engineer Lieke Dekker.

Seafarer snapshots, from captains to cadets

Plus, readers can download snapshots of women seafarers across the industry for an up-close and personal look at their backgrounds, views on women at sea, challenges and aspirations.

In its biggest edition ever, Seatrade Cruise Review profiles Norwegian Cruise Line veteran Mark Kansley, SVP hotel operations, who's about to bring out Norwegian Joy, a ship built for China that's being transformed for its US debut. The magazine also looks at Carnival Corp.'s OceanMedallion wearable technology from the perspective of the Caribbean Princess crew.

Other features examine how many cruise ships are too many and how ports and destinations are trying to strike the balance; new developments, port infrastructure investments and marketing initiatives along the Pacific coast of the Americas; and Global Ports Holding's growing 'port-folio' as the world's largest cruise port operator advances into the Caribbean with three major deals—Havana, Cuba; St. John's, Antigua; and Nassau, Bahamas.

Special country reports on the UK & Ireland, Germany and Italy, and the latest ship refurbishments are also in this jam-packed issue.

Get a copy of the magazine by visiting the Seatrade Sales Suite 1225 at Seatrade Cruise Global.