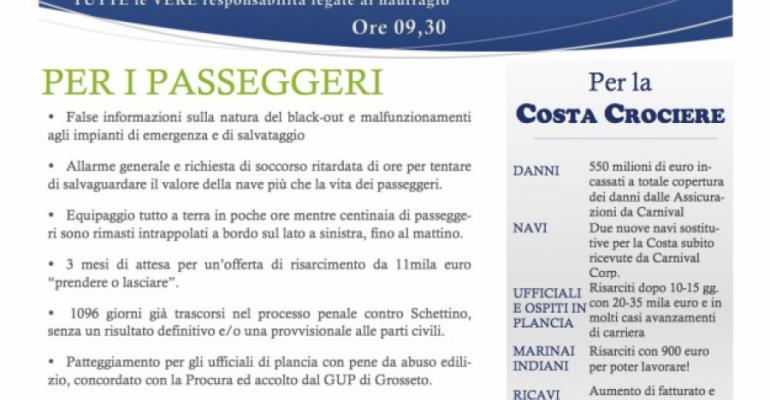 'Justice for the Concordia' flyer advertises sit-in at trial site in Grosseto on second anniversary of the deadly grounding
Going on two years since Costa Concordia's deadly capsize, a number of events are planned in the coming days that will put the tragedy squarely back into the public eye.

Officials have scheduled a media briefing on Friday to present the next phases of the wreck removal. Then, on Monday, there will be commemorative events in Giglio, and a sit-in is planned at Grosseto, site of the on-going criminal trial, to call for justice for the Concordia victims.

As of the last briefing, the wreck has been secured for the winter and is being monitored around the clock. Fifteen additional sponsons needed for the refloating are expected to be installed in April, following the completion of repairs to the damaged starboard expanse of the hull. The schedule projects the wreck to be towed by the end of June.

On Monday, the two-year anniversary of Costa Concordia's grounding, various solemn activities are planned on Giglio. They include holy Mass, an afternoon concert and an evening torchlight procession to the waterfront where a prayer will be said for the victims.

That same day, the criminal trial of Capt. Francesco Schettino is scheduled to resume at Grosseto. He is battling multiple charges of manslaughter, shipwreck and abandoning ship.

However, the proceedings are expected to be stalled by another nationwide lawyers' strike like the one that delayed Concordia hearings last July. The periodic strikes have been staged to protest government reforms aimed at speeding up civil trials. Schettino's defense attorneys have reportedly informed the court they intend to participate in the latest walkout, planned for Jan. 13-15.

If the strike goes ahead, the Concordia trial is not expected to resume until Jan. 27.

There are also plans for a march to the Grosseto trial site, Teatro Moderno, and a sit-in with five minutes of silence in memory of the victims. The protest is organized by a pool of 'Justice for Concordia' attorneys seeking damages for clients.