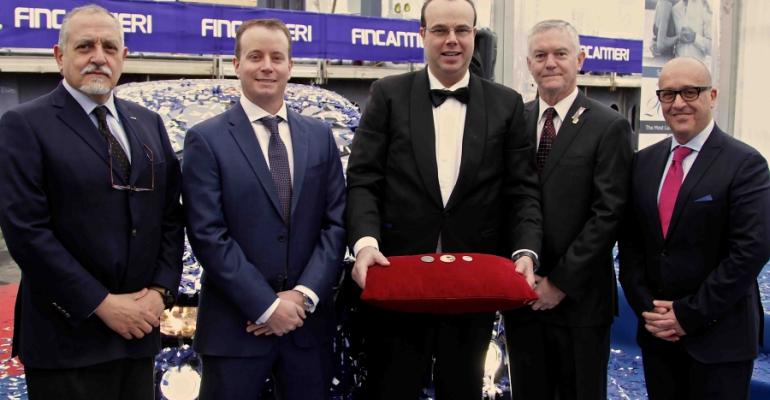 Fincantieri's Sestri Ponente yard on Wednesday laid the keel for what is touted as the most luxurious cruise ship ever built, following the opening of bookings for Seven Seas Explorer on Monday when Regent Seven Seas Cruises posted record revenue for a single day.

Seven Seas Explorer is the first ship Fincantieri is building for Regent, a new luxury customer.

'Today we celebrate a major milestone in the construction of Seven Seas Explorer as we place the first building block for a vessel that will be hailed as the most luxurious ship ever built when she joins our fleet in the summer of 2016,' said Regent president and coo Jason Montague, accompanied at the ceremony by Fincantieri yard manager Raffaele Davassi.

Montague said Regent wants to 'redefine luxury vacations' with Seven Seas Explorer, adding that 'every corner of this new ship will exude elegance, starting with a new category of luxury suite that we named the Regent Suite.' Unveiled last week to media and top-producing travel agents in New York, this plush 3,875-square-foot suite has a beam-to-beam outdoor balcony with a glass-enclosed sitting area for unobstructed 270-degree views over the ship’s bow, and an in-room spa retreat.

'The opulence found in the Regent Suite sets the tone for the high level of craftsmanship and design found throughout the ship, including 10 categories of ultra-luxurious suites, representing some of the largest in the industry, and a collection of elegant gourmet restaurants and stylish public spaces,' Montague continued. He thanked the Fincantieri team, adding: 'We couldn’t be happier with our long-standing relationship.'

'It has been the highest single-day (booking) revenue in the history of the company,' he said, joining the ceremony with Franco Semeraro, svp hotel operations.

Regent's representatives, together with shipyard manager Davassi, participated in a good luck ceremony where a coin was welded into the ship’s keel.

Three coins were used, including a rare 1921 US silver coin known as the 'peace dollar,' symbolizing safe passage for Seven Seas Explorer; a 1959 silver Italian lire, representing the year the Fincantieri shipyard was established; and a commemorative coin specially minted for this occasion.

The coins were delivered to the ceremony by a black Rolls-Royce, 'as every aspect and detail in the building of such an exclusive ship should convey a sense of luxury,' Montague said.

The 370-ton keel block was then blessed by Genoa’s Cardinal Archbishop, Angelo Bagnasco.