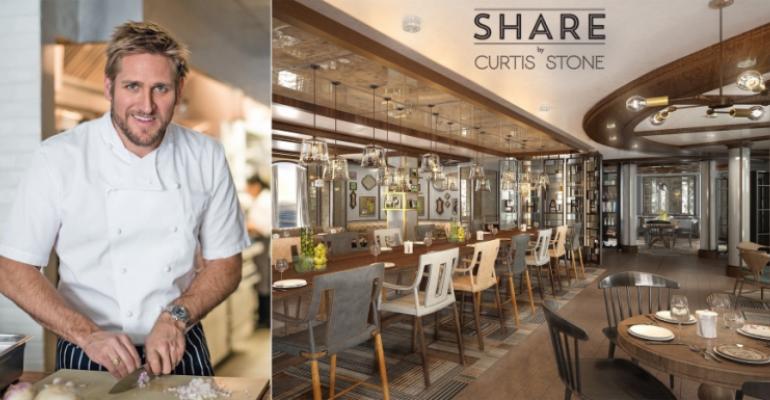 Chef Curtis Stone's first restaurant at sea offers a menu of signature dishes designed for sharing and served family-style in an environment Princess Cruises said is conducive to conversing.

SHARE is scheduled to debut aboard Ruby Princess and Emerald Princess this December.

The previously announced partnership with Stone also adds 'Crafted by Curtis' menu items in the main dining rooms, to debut aboard Golden Princess in the fall and roll out fleetwide through the end of 2015. Curtis Stone’s Chef’s Table experience will debut in early 2016.

A centerpiece communal table is designed to encourage the sharing of a freshly prepared meal in the company of friends and family. The chef explained he loves 'the process of passing plates amongst each other and creating meaningful connections through the food and conversation.'

Hand-blown glass pendants etched with some of Stone’s favorite recipes cast an intimate glow. Low-backed banquettes are upholstered in Chesterfield tufted leather and decorative curios from Stone’s own collection include photographs and travel souvenirs.

Following SHARE's debut aboard Ruby Princess sailing from Los Angeles on cruises to Hawaii and Mexico and Emerald Princess sailing from Fort Lauderdale to the Caribbean in December, the rollout will continue aboard Coral Princess cruising the Panama Canal in January and then Sun Princess in April, which will take Stone’s restaurant to his home country, Australia.