A shared vision for Silversea's growth and a higher brand profile 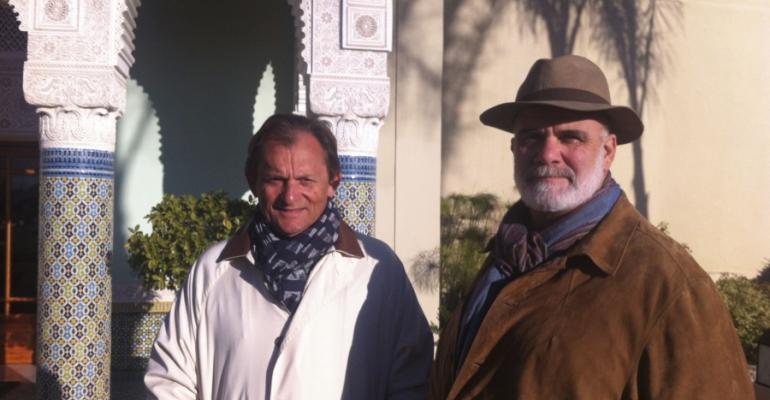 Lifelong friends - Roberto Martinoli, left, with Manfredi Lefebvre in Morocco during a vacation several years ago

In tapping Roberto Martinoli as chief executive of Silversea Cruises, Manfredi Lefebvre d’Ovidio chose not only a highly respected shipping professional but also a lifelong friend.

The two were schoolmates in Venice—'little sailors,' as Lefebvre quipped during a joint phone interview from Monaco on Martinoli's second day in the office.

The call's lighthearted tone suggests a new era for Silversea, and the mutual respect and trust between the two executives rang through as they discussed fleet expansion, the management team and a higher profile for the brand.

Lefebvre wants Martinoli to be Silversea's 'voice' though, as executive chairman, Lefebvre will continue to speak about the company along with addressing industry issues. He noted that after the Costa Concordia incident, Cruise Lines International Association asked Martinoli to talk to the European media as a representative of the entire industry.

Martinoli confirmed he intends to be highly visible alongside Lefebvre—and not just in Europe.

'We will be talking a lot more about our brand and its bright future,' he said, adding that includes key markets like the US where, in recent years, Silversea has been overshadowed at times by others.

Martinoli is already well-versed in Silversea's strengths and challenges since he's served on the board since 2013.

Having led Grandi Navi Veloci in Europe and Norwegian Cruise Line in the US, as well as advising Apollo Global Management and holding senior roles with Carnival Cruise Line stateside and Costa Cruises in Genoa, his expertise spans shipbuilding, operations, finance and much more. At Silversea Martinoli is in charge of the entire business, including sales, marketing, land programs, human resources and everything else.

'It's a very exciting time for Silversea with the newbuild Silver Muse coming and a very aggressive newbuild and conversion program both in the classic and expedition fleet,' Martinoli said.

Next year Silver Muse becomes the first in what's expected to stretch into a multi-ship series, while Silver Cloud, the line's original ship, is being converted to join Silversea Expeditions. Recently plans were announced for $170m in fleetwide refurbishments, to start with Silver Whisper, Silver Wind and Silver Discoverer in 2016.

Silversea is close to choosing the yard that will complete the Silver Cloud conversion. 'It will be a phenomenal expedition vessel with features that are very different,' Martinoli predicted.

Lefebvre said the space, dining options and service will set a new standard in expedition cruising. He also confirmed that Silversea, which until now has used existing tonnage to grow its expedition fleet, plans to build for that sector, as well.

After a number of management departures this year, 'We have a very strong team in place,' Martinoli said, adding there is no reason to foresee further changes.

Lefebvre summed it up as 'a very good mix of new blood and experience,' while Martinoli called them a 'great group of individuals with diverse experience.' He knows most but not all; Conroy, for example, was the president of Regent Seven Seas Cruises when Martinoli was consulting for key shareholder Apollo.

They're good friends, too.