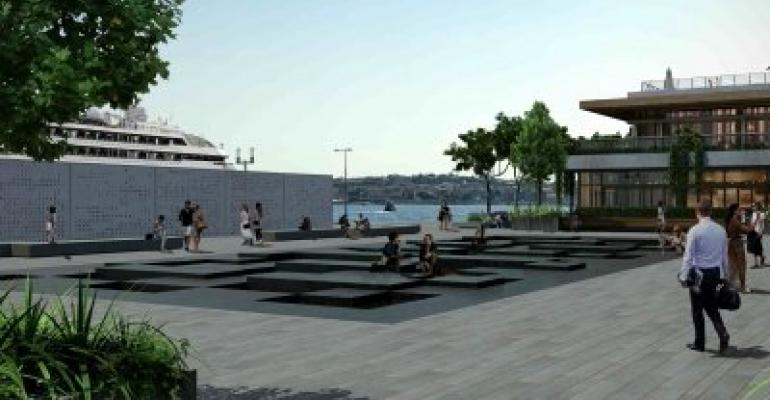 When a ship is in port, 3mtr-high hatches (at left) will rise from the ground to secure the area
With several cruise lines returning to homeport in Istanbul next year after a four-year lull, Galataport has been spending the quieter times upgrading its cruise facilities in preparation.

Following the Port of Istanbul's privatisation, Doğuş Group acquired the right to manage and develop Galataport in 2014 for a 30-year concession. At that time cruise activity was flourishing and, among 55 cruise lines sailing in the Mediterranean basin, 43 with nearly 1.5m passengers were visiting Turkey’s marquee destination.

‘From mid-2016, the geopolitical challenges of our region negatively hit Istanbul and all the other leading Turkish cruise ports,’ Erdem Tavas, CEO Galataport Istanbul, told Seatrade Cruise News during an exclusive interview in Miami.

Now Istanbul is rebounding, he continued, and is featured on several cruise line itineraries in 2019 or 2020 onward.

To coincide with the big return of traffic to the Bosphorus, Galataport is set to open its new cruise terminal in March 2020, located on a 1.2km long pier in a prime spot neighboring the old city and an extension of the historical peninsula.

When the Galataport Istanbul Cruise Port is completed, it will be able to accommodate three ships at the same time and host an average of 15,000 cruise passengers per day. The annual visitor expectation is around 2.5m, Ayan noted.

The new terminal is being constructed under the ground, a ‘first,’ Tavas said.

According to the plans, the customs and security areas are separated from the rest of the surroundings via 3mtr-high hatches which will emerge from the ground ahead of a ship visit, enabling cruise operations to be carried out behind this wall. All passenger and luggage movements will take place in the underground terminal covering more than 20,000sq mtrs.

Along the entire berth almost 200 hatches will separate the customs and security areas from the rest of the property. The hatches will open to match the length of the ship. Should there be multiple ships in Galataport, the number of hatches will open accordingly and the view will not be disrupted.

Tavas explained, ‘The new facility has been designed with homeporting in mind but when we look at global trends we see that experience has become the rising star of many sectors, not just tourism but for retail, gastronomy and the culture and arts sectors and our vision at Galataport is not limited to increasing cruise traffic.

‘Besides being a homeport, Galataport will also become a tourist attraction, a new destination within a destination with multiple offerings not just for tourists arriving by sea but for everyone in the city,’ the CEO said.

Tavas and Ayan were on a mission at last month’s Seatrade Cruise Global to showcase the new Galataport project. This included an interactive wall on their stand to better explain the revolutionary underground port operation when meeting with the cruise lines. ‘We had very positive feedback that we were on the right track,’ Ayan and Tavas concluded.