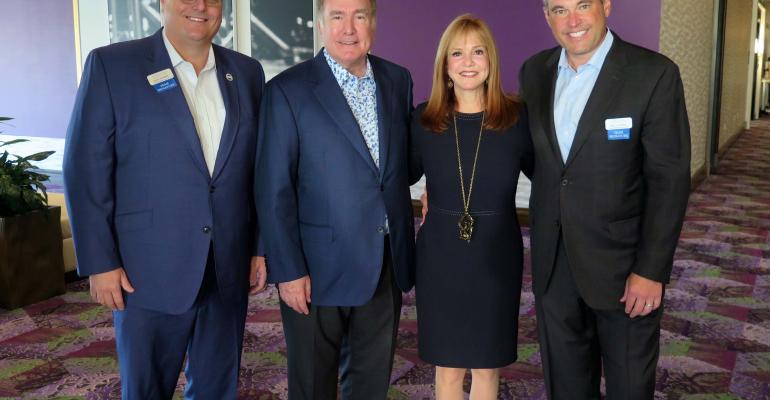 At Signature Owners' Meeting, from left, Signature CEO Alex Sharpe, Royal Caribbean CEO Richard Fain and SVP Vicki Freed, Signature SVP Phil Cappelli PHOTO: Anne Kalosh
Sixty percent of Americans believe a recession is likely in 2020 and many travel sellers are concerned about this, along with disruption from the US presidential election.

The latest ABC News/Washington Post poll has six in 10 Americans worried about a recession and as many fretting about higher prices due to the trade war with China.

Doug Crosby, owner, Holiday Cruises & Tours in Las Vegas, called 2019 a ‘dynamite year.’ However, he thinks 2020 will be slow — a combination of ‘politics’ and the ‘slowing economy.’ His agency will do fine, though, Crosby said, because it has so much business on the books.

Crosby and other owners in the powerful Signature Travel Network heard some reassurances from cruise line partners and their group’s leadership during the Signature Owners’ Meeting in Austin, Texas, Sept. 11-14.

People are 'trying to talk us into a recession'

‘A lot of people are trying to talk us into a recession. The same people have successfully predicted the last 18 of two recessions,’ quipped Richard Fain, chairman and CEO, Royal Caribbean Cruises Ltd., during his Friday keynote address.

‘We’re just seeing an amazing economy. We’re also seeing people’s confidence in the economy, which is a prerequisite to buying a cruise.’

This has been the longest recovery from recession, but also the slowest, according to the RCL chief, who suggested a fast recovery could have triggered an overheated economy. ‘That slow and steady [pace],’ he said, is working well for everybody.’

Fain added that recessions will come and they’ll be painful, but ‘the world doesn’t come to an end.’ Oasis of the Seas, he pointed out, debuted at a ‘horrible time,’ in 2009, yet was ‘amazingly successful, notwithstanding the recession.’

During his remarks to the Signature owners, Gary Murphy, SVP sales and co-owner, AmaWaterways, predicted softening sales in an election year, admitting ‘We’re worried.’ But Murphy said his company is introducing just one vessel in 2020, and AmaWaterways is well-positioned financially.

Unusual for a river-cruise operator, the line owns most of its vessels and, by next June, AmaWaterways will carry no debt on its 24-strong fleet, Murphy said.

Signature President and CEO Alex Sharpe said it was the network’s ‘best year ever’ and 2020 is ‘looking as good.’ Cruise revemue was up 10% through the fiscal year ended May 31. Hotel revenue rose 14%, the destination specialists program 20%, insurance sales 12% and business with land suppliers 4%.

Sharpe described 2019 as an ‘incredible’ year for cruising, even with the recent disruption by Hurricane Dorian and the loss of Cuba as a destination.

‘Pricing, for us, is great,’ he added. Lines are touting value-added amenities instead of discounting, which help sales and keep pricing integrity.

Phil Cappelli, SVP preferred partnerships, conducted research on past election year sales patterns and, like Royal Caribbean, found little disruption. However, Sharpe conceded that since this particular election has the chance to be ‘super-disruptive,’ Signature came up with a plan to get out in front on sales.

Should there be a recession, the network has the programs and the depth of staff to help address that, added Karryn Christopher, EVP marketing & preferred partnerships. ‘We’ll be there for our members,’ she said.

Signature’s database of 4.5m households is its strength, and the network is known for its member engagement. These make it a ‘go-to’ partner for its preferred suppliers, and Signature’s average daily rate is higher than that of its partners.

In recent moves, Signature consolidated marketing programs under Christine Conklin as VP marketing, and brought in Capelli as SVP preferred partnerships. Technology programs, including a cruise booking engine with partner Odysseus, due to be running before wave season, are advancing under Karen Yeates, EVP information technologies.

Other objectives include a strong focus on sustainability and giving back through the network’s charitable initiatives.

A close call for travel agency owners in general was the recent last-minute exemption of travel agents from California’s Assembly Bill 5, which would have required independent contractors to become W-2 employees.

This would have cost travel agencies an estimated $61.6m, according to Eben Peck, EVP advocacy, American Society of Travel Advisors.

AB 5 made for the ‘biggest fight and biggest win’ ever for ASTA, Peck said. However, he warned that states like New York, Washingon and Oregon are considering similar legislation and noted AB-5 was endorsed by at least four presidential candidates.

When it comes to issues like overtourism, groups like Signature can steer clients to less crowded destinations and travel periods. Instead of sending people to Barcelona in July, travel advisors can suggest an alternative like Valencia, Signature EVP Ignacio Maza noted.

‘There’s always going to be a new frontier to discover,’ he said, pointing to emerging destinations like São Tomé and Príncipe.

And in light of the many expedition ships being introduced — putting the limited landing sites in Antarctica under pressure, for example — supplier partners are getting very creative with itineraries.

Maza pointed to how Crystal Expedition Cruises will be ‘taking a totally different path,’ with longer Antarctic journeys featuring the Ross Sea from Australia and New Zealand. Crystal Endeavor will also explore Japan. Ponant, too, is branching out with itineraries to such seldom-visited destinations as the Comoros, which sell out, Maza said.