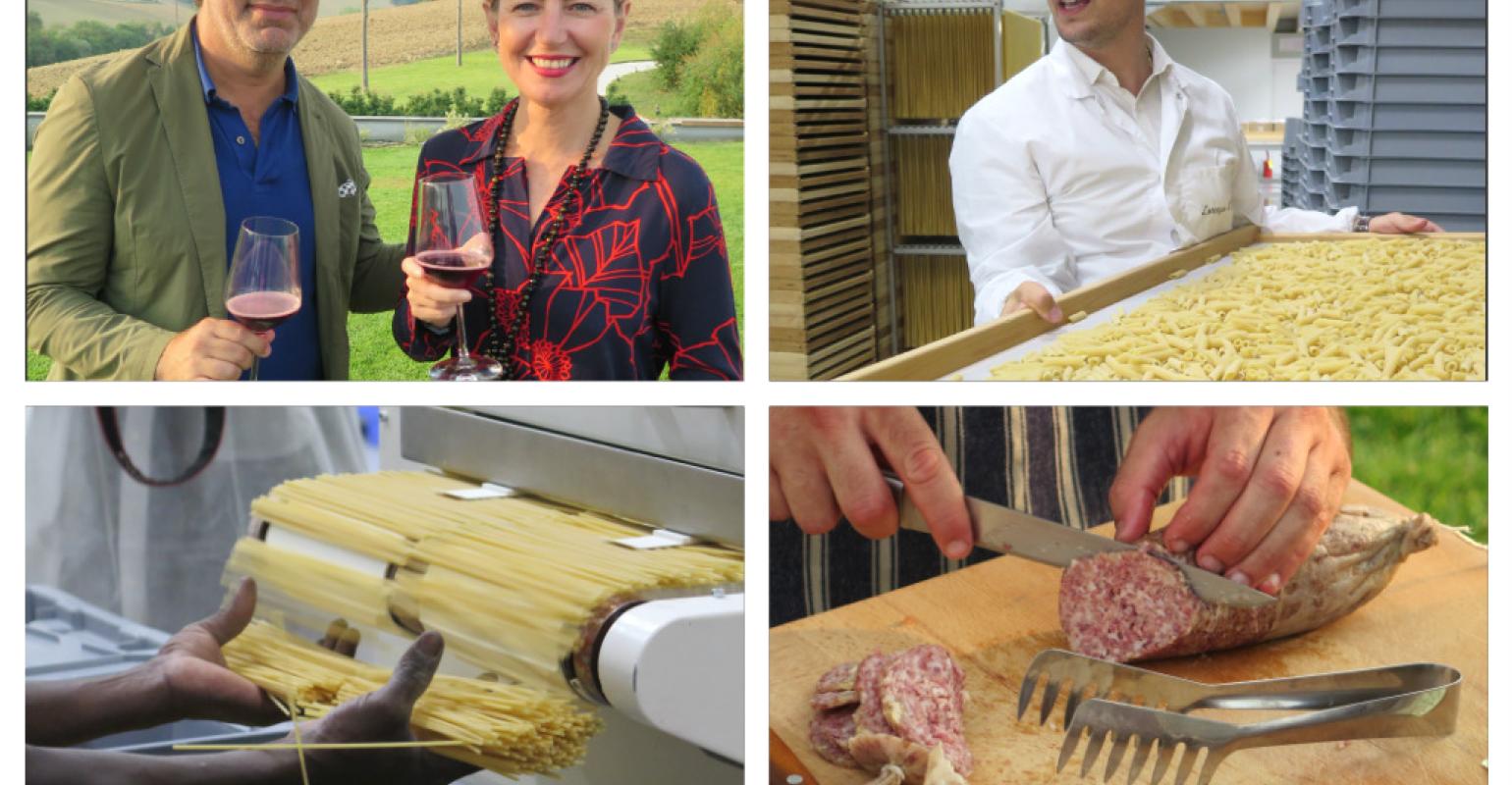 A visit to Pastificio Mancini began with local appetizers and spumante and continued with a tour of the pasta factory followed by a wheat-harvest-themed dinner. From top left, clockwise, S.A.L.T. Director Adam Sachs with Silversea's Marina Vivian, Lorenzo Settimi with a tray of fresh pasta, handmade sausage prepared by Chef Aurelio Damiani, dried spaghetti emerging from the cutting machine to be hand-packaged PHOTOS: Anne Kalosh
‘There is a farm that produces pasta in the middle of a wheat field.’ That’s the pitch for Mancini Pastificio Agricola, not far from the Adriatic port of Ancona, Italy, where Silversea Cruises’ Silver Moon has just been floated out.

Pastificio Mancini will be part of Silversea’s new S.A.L.T. culinary program, which debuts with Silver Moon in 2020. S.A.L.T. — Sea and Land Taste — is designed to give travelers a deeper understanding of destinations by immersing them in authentic local culinary traditions.

South of Ancona, where the Fincantieri shipyard is nestled in a section of the harbor built by the Roman Emperor Trajan, are rolling hills dotted with small farms. These form a colorful patchwork of grapevines, sunflowers, beans and alfalfa.

At Fermo, a farm owned by the Mancini family grows and harvests durum wheat using eco-friendly principles defined by Italy’s Buona Pratica Agricola rules, including crop rotation to retain the soil’s nutrients. The grain is ground into semolina flour and made into pasta at the Mancinis’ small, modern factory right in the middle of the fields.

In this way, they control the entire process, resulting in pasta of extraordinary flavor and quality.

‘I think pasta is important. I take this very seriously,’ Massimo Mancini, third generation wheat farmer, told Silversea visitors last week. Chefs are getting more educated about the dramatic difference of his meticulously crafted pasta compared to ‘industrial’ products — to the point where they’re asking him ‘What type of harvest are you having this year?’

At the Mancinis’ factory, custom-made bronze dies are used for the pasta shapes, giving a textured surface to the pasta that makes it hold its sauces better. The pasta is then slowly dried at low temperatures to retain its flavor and nutrients.

Each package of Mancini pasta lists the type of wheat used and the date of the harvest.

Following Silver Moon’s float-out, he led a visit to show the type of experiences that will be offered in the S.A.L.T. program.

Chef Aurelio Damiani of Trattoria Damiani & Rossi in nearby Porto San Giorgio was on hand to prepare a harvest-inspired meal. (In this area, the wheat is harvested in the summer.)

The visit began on the grass-topped roof of the pasta factory, with local appetizers like handmade sausage, pecorino cheese and fried squash blossoms stuffed with ricotta, accompanied by a locally produced spumante. Pastificio Mancini Sales and Marketing Manager Lorenzo Settimi described the Lacrima di Morro D'Alba Superiore Mancinelli Stefano as ‘a little sweet and a little romantic; it goes well with the fried food.’

Then visitors donned jackets and caps to tour the factory, tasting the pasta as it emerged fresh from the machine before being put into drying rooms. A blind pasta tasting revealed the difference in consistency, fragrance and taste between this, what Mancini distinguishes as ‘agricolo’ (agricultural) pasta, compared to the ‘industriale’ (industrial) and ‘artigianale’ (artisanal) types.

A meal outdoors under a string of lights, on a lawn beside the fields, highlighted foods workers would fortify themselves with during the hard work of the harvest — hearty dishes like spaghetti with butter and black truffles from the nearby Sibillini Mountains and roasted duck with potatoes. A cake made with mosto (the freshly pressed juice of wine grapes) was served with gelato.

It's this kind of immersive experience that Silversea is crafting for the shoreside aspect of S.A.L.T., a program Sachs described as ‘holistic’ because it also involves enrichment on board.