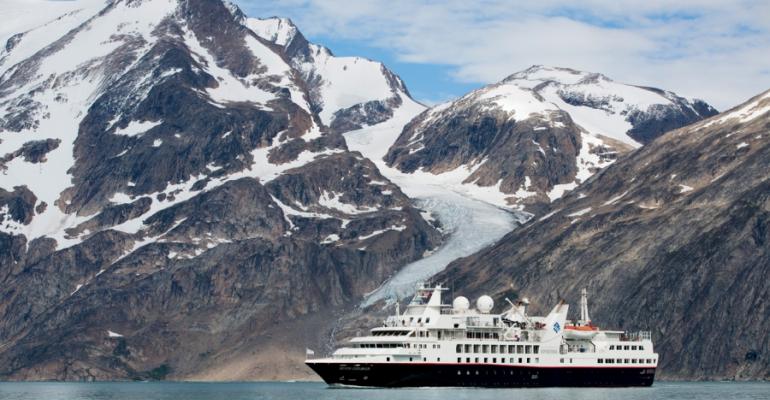 Silver Explorer sailing off the coast of Greenland

The 23-day voyage commenced in Kangerlussuaq, Greenland, on August 9 and concluded in Nome, Alaska on September 1. It covered a distance of nearly 3,500 nautical miles, following a route through the Canadian Arctic Archipelago similar to Roald Amundsen's east-to-west expedition of 1903 to 1906, the first successful navigation by boat through the passage.

'Sailing the Northwest Passage is an experience reserved for true adventurers and dedicated explorers,' said Conrad Combrink, Silversea's director of expedition planning and strategic development. 'We are honoured to know that what was once an unfulfilled dream for such renowned explorers as Capt. James Cook, Henry Hudson and many others, is now a successful chapter in the history of Silversea Expeditions.'

The Northwest Passage is famous for its shallow channels and floating ice. Although summer ice conditions have permitted a number of successful transits since Amundsen's expedition, the passage can still present challenges. The small Silver Explorer, with its shallow draft, ice-strengthened hull, 1A ice class certification and Capt. Alexander Golubev at the helm was well suited to take on such missions, Combrink stated.

'It's a special privilege to sail through the world's most elusive and historic waterways. Such a journey requires careful and meticulous planning at every stage,' said Golubev, who has led more than 50 voyages to the Arctic, Antarctic and Greenland. The captain enlisted the services of an icebreaker to escort Silver Explorer through a critical portion of the route.

'I'm pleased that all our strategising and preparations resulted in success for Silversea's first Northwest Passage expedition, and I’m very grateful to be among a small group of mariners who have experienced such an extraordinary  opportunity during their careers,' Golubev said.

Silversea is a member of the Association of Arctic Expedition Cruise Operators.