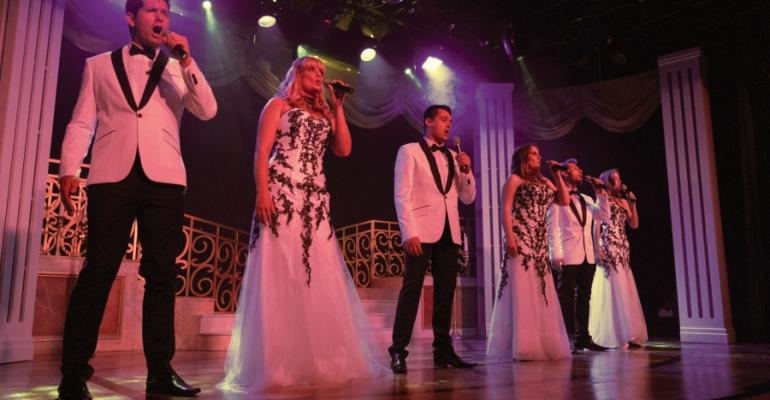 The Voices of Silversea

Seven shows will spotlight the talents of an international ensemble of vocalists, the Voices of Silversea.

Three principal productions that will be performed in the main Show Lounge fleetwide include 'Musica Maestro,' a tribute to popular operatic arias and classical crossover music. Led by renowned conductor Richard Balcombe, its musical score has been arranged, performed and recorded by London's Royal Philharmonic Orchestra exclusively for Silversea.

'Mind the Gap' is characterized by mod fashions and the imagery of a London tube station for a journey back to the 1960s and the British Invasion including the Beatles, the Rolling Stones, Lulu, Tom Jones and more.

'Don't Stop the Music' is a sing-along homage to the disco era before the audience is invited to take to the dance floor when the ship's DJ steps in to keep the party rolling.

Four additional shows will be rotated among the ships to provide a total of four full-scale musical productions on each cruise. The additional shows include 'Caliente,' a Latin-flavored production encompassing tunes from Spain and South America; 'Shaken Not Stirred,' featuring James Bond films; 'Première,' a chronological musical tribute to some of the world's greatest movies; and 'Amore,' featuring love songs.

In addition to their main Show Lounge performances, the Voices of Silversea will perform duets and cabaret-style shows in more intimate settings throughout the ship.

Passengers aboard Silver Wind this week, and Silver Cloud next week, will get a preview selection of some of the new shows, all created for Silversea by London-based Luna Rossa Productions. The entire entertainment program will then roll out fleetwide over the coming months.