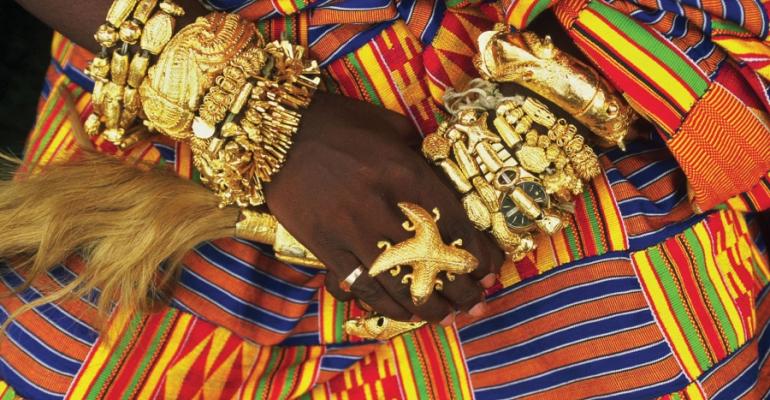 Overland tour participants will witness the gold and grandeur of the Ashanti kingdom (Photo: Silversea Cruises)

Silversea Cruises is offering the opportunity to gain insights into the culture, history, and people of Ghana as part of Silver Cloud's March 16 West Africa cruise.

This 16-day sailing from Tema (Accra) to Barcelona can be paired with a six-day pre-cruise 'Accra & the Ashanti Kingdom' land adventure coinciding with the Festival of Akwasidae. Set within the walls of the royal palace in Kumasi, this centuries-old ceremony honoring the community's ancestors is presided over by the king of the Ashanti people.

One of the most powerful nations in Africa until the British annexation at the end of the 19th century, the Ashanti empire's traditions live on in Kumasi, a city of nearly 1m with one of Africa's largest central markets.

The land program begins with three nights in Kumasi, highlighted by the Akwasidae Festival, presided over by the Asantehene, Otumfuo Osei Tutu II, the 16th ruler of the Ashanti people. During the ceremony, the king and his dignitaries are seated beneath a parasol and adorned in gold ornaments and ceremonial dress. Griots will tell stories of past Ashanti rulers while drum and ivory-horn players accompany traditional dances.

'Like all of our overland adventures, this exciting program has been hand-crafted to enhance our guests' experiences ashore, and to provide them with cultural immersion opportunities that would simply not be possible otherwise,' said Silversea's Darius Mehta, vp air and land programs.

Participants will stay at the Labadi Beach Hotel in Accra for two nights and at the Golden Tulip Hotel in Kumasi for three nights. The excursion is priced starting at $3,979.