Singapore and Malaysia on haze-watch; cruise calls unaffected so far 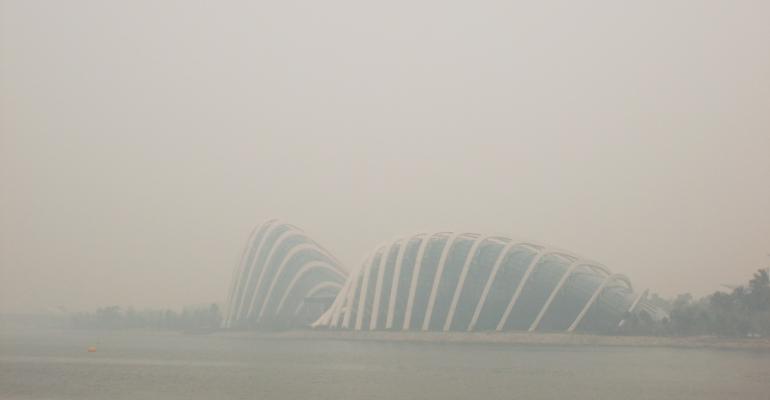 Once again parts of South East Asia are being blanketed with smoke from raging forest fires in Sumatra, Indonesia. It is a seasonal blight in the region.

Seatrade Cruise News checked with the Singapore Tourism Board on any impact it may have on cruise vessels headed to Singapore and a spokesperson from its Cruise Industry Development unit said there has been none thus far.

He confirmed that based on feedback from the Republic’s two cruise terminal operators, there has been no indication from cruise lines about any changes to their itineraries.

The Singapore Cruise Centre schedule shows that SuperStar Gemini is due to call there on the September 16, 18 and 20.

According to the Marina Bay Cruise Centre website, Diamond Princess is scheduled to call at 7am in Singapore on Thursday September 17. The vessel is due to arrive from Vietnam and will leave for Bali the same day at 5pm. The next vessel scheduled to call at MBCC, on October 3, is Sea Princess.

Chin Ying Duan,  corporate communications manager, Singapore & SE Asia, Royal Caribbean Cruises (Asia) Pte Ltd told SCN, ‘We have only Legend of the Seas sailing in this region at the moment and so far her itineraries have not been affected by the haze. We are monitoring the weather situation closely. Our ship started out from Singapore on Sunday and is in Langkawi today. Tomorrow she will be in Phuket and is expected to reach Bali on September 20 followed by Lombok, Indonesia, before reaching Fremantle, Australia on September 27.’

Singapore and Malaysia are on a haze-watch. On and off there are brief improvements in conditions but any respite is short-lived as prevailing winds blow over the acrid smoke and ash again.

As at 8pm yesterday  the 24-hr pollution index issued by Singapore’s  National Environment Agency (NEA) stood 130-161, in the low to mid sections of what is classified to be in  the ‘unhealthy range’. Schools are on standby and could be closed temporarily should the index rise beyond 301.

Almost a thousand burning forest fires, which show up as hotspots in satellite images, have been detected in Sumatra in recent days.

Singapore’s Minister for the Environment and Water Resources Dr Vivian Balakrishnan has been in touch with the Indonesian government expressing concern and reiterating Singapore’s offer of help to Indonesia, which has gone unaccepted thus far.

Indonesian Minister of Environment and Forestry Siti Nurbaya Bakar explained that Indonesian authorities are deploying a host of resources, including aircraft and helicopters as well as military and police forces, to try and control the fires and conduct law enforcement.

She said they will consult Indonesian President Joko Widodo, who is personally overseeing the effort, again on Singapore’s offer.