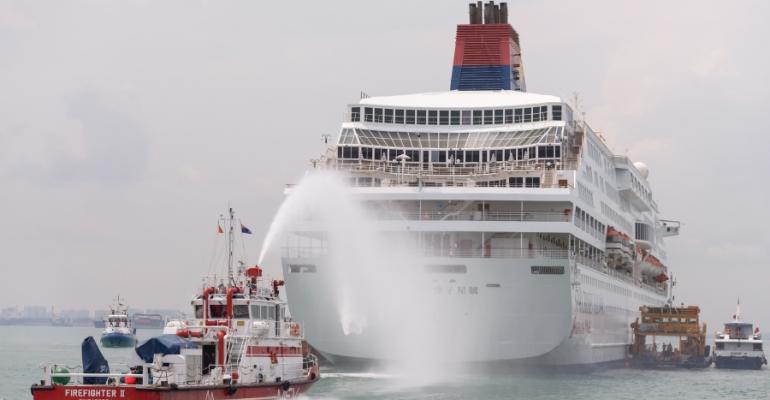 The Maritime and Port Authority of Singapore held a full-day emergency preparedness exercise involving the evacuation of some 700 passengers and crew aboard a Star Cruises ship. Friday's 'Exercise Blue Dolphin 2014' tested the readiness of various agencies to respond to passenger vessel incidents in the Port of Singapore.

More than 1,000 personnel from 21 agencies and companies participated.

Elements included a table-top drill at the Port Operations Control Centre at PSA Vista and deployment of resources to test the preparedness and response of mass evacuation and transfer of persons at the sea. The exercise was conducted in the Eastern Holding Anchorage, approximately 4.5 kilometers from Marina South Pier and at the landward locations in Marina South Pier and the Marina Bay Cruise Centre Singapore.

The exercise scenario started with a fire in the engine room of a cruise ship heading toward Singapore. The master reported the incident to the Port Operations Control Centre and requested assistance in fire-fighting and evacuating the passengers. The evacuated passengers and crew were taken to the landing point at Marina South Pier where the injured received medical attention and the Marina Bay Cruise Centre Singapore provided temporary refuge.

'As a major hub port along a very busy waterway, Singapore takes the safety of vessels and passengers seriously,' said Andrew Tan, chief executive of the Maritime and Port Authority. 'The exercise today gives us an excellent opportunity to test our inter-agency response to any major emergencies at sea involving real assets and people. We cannot take safety for granted and it involves everyone playing their part.'