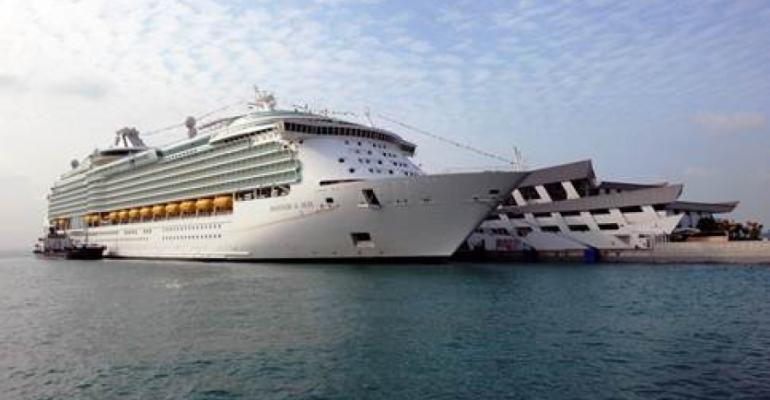 Royal Caribbean International signed a multimillion-dollar marketing collaboration with the Singapore Tourism Board and Changi Airport Group which will promote cruises from Singapore and cast a wide net for fly-cruise passengers.

The collaboration—running between 2015 and 2018—is projected to reel in more than 170,000 overseas visitors to Singapore to sail on Royal Caribbean cruises over that period, resulting in growth of more than 50%.

This will be done via a series of marketing campaigns, research studies and channel development activities, such as partnerships with the media and trade. Besides markets within Asia—India, Indonesia, Malaysia, the Philippines, China, Hong Kong, Japan, Korea and Taiwan—the effort will go beyond to Australia, Europe and North America.

Royal Caribbean also plans to increase sailings from Singapore during this period to more than 40 a year. Currently, the 3,807-passenger Mariner of the Seas makes around 30 voyages annually. The ship's next Singapore season starting in October will be its largest and offers more long cruises of seven to 15 nights, aimed at attracting more overseas fly-cruise passengers.

Royal Caribbean has deployed ships from Singapore regularly for the past seven years.

'Our three-year deployment plan is our strongest commitment ever to this market and we see great potential in Singapore as a source market and regional cruise hub,' said Sean Treacy, managing director, Singapore and Southeast Asia, Royal Caribbean Cruises Ltd. 'We highly appreciate this collaboration which will be a tremendous support for our business goals in Singapore and Southeast Asia, as well as the strong efforts of the Singapore government for being so proactive in driving the cruise business in the country.'

Projected to generate more than $100m in tourism receipts, the collaboration with Royal Caribbean contributes substantially to Singapore’s cruise industry, with an estimated compounded annual growth of 5% to 8% in throughput over the next three to four years. With the cruise business already generating more than $500m in direct spending in 2013, this development promises a further injection of significant economic impact.

The region appeals particularly strongly to Asians due to its close proximity to home, with eight in 10 who have never cruised before expressing interest to embark on a cruise within Southeast Asia.

As such, the marketing collaboration with Royal Caribbean and Changi Airport is a significant development for Southeast Asia, according to Neeta Lachmandas, assistant chief executive, Business Development Group, Singapore Tourism Board.

'We hope Royal Caribbean’s commitment will inspire new cruise itineraries around the region to offer more reasons for travelers to take to cruising, and also motivate our neighboring ports and destinations to invest and realize fully the tremendous potential of the Asian cruise industry,' she said.

Providing a link between Royal Caribbean, Singapore and the region is Changi Airport’s connectivity to 320 cities worldwide, along with some 6,700 weekly flights, giving Singapore a strategic advantage to effectively tap fly-cruise traffic from across the globe and serve as a cruise hub for Asia.