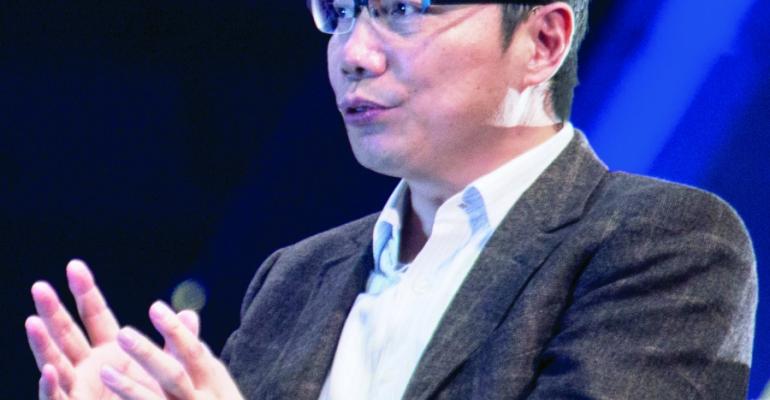 Min Fan, ceo of SkySea Cruises and co-founder, vice chairman and president of Ctrip
SkySea Cruises’ Golden Era (the former Celebrity Century) has started operating from Shanghai for the new China-based joint venture between Ctrip and Royal Caribbean. The 72,458gt vessel is headed today for Jeju in South Korea.

'Offering the best Chinese features mixed with international style’ is how Min Fan, ceo of SkySea Cruises and co-founder, vice chairman and president of Ctrip, described Golden Era at the official introduction of the vessel targeted at Chinese passengers before the maiden voyage from Shanghai on May 15.

Wilhelmsen Ships Service has been appointed as the ship's general agent in China and WSS China will also be providing full ship's agency services to Golden Era on calls in Japanese ports.

At last week’s earnings call for Ctrip’s first quarter results, Fan stated, ‘China is already the second largest travel market in the world, yet it represents huge growth potential. While China’s GDP per capita is approaching one-seventh of the US GDP per capita, China’s per capita expenditure on tourism was only over RMB 800 or $130, far less than one-tenth of that in the US.’

Fan added, ‘To best accommodate the fast growing demand we have invested and will continue to invest aggressively to expand and leverage our advantages in IT, infrastructure, customers and brand.’

The China-focused travel provider of hotel accommodations, airline tickets and packaged tours reported revenue of RMB 2.4bn or $394m in the first quarter, a 46% increase from the same period in 2014. Total revenues increased 21% from the previous quarter.

Accommodation reservation revenues amounted to RMB 952m or $154m for Q1, a 45% increase year-on-year, while transportation ticketing revenues were RMB 948m or $153m, representing a 46% increase. Packaged tour revenues for the were RMB 396m or $64m, a 53% increase, primarily driven by growth in organized tours and self-guided tours.

'Lower-tier cities are presenting huge market opportunities,' he commented. ‘In many second- and third-tier cities, GDP per capita is around the tipping point where leisure travel and outbound travel is getting to the sweet spot for growth. We are seeing robust growth and increasing contribution from these markets,’ Jianzhang Liang told analysts.